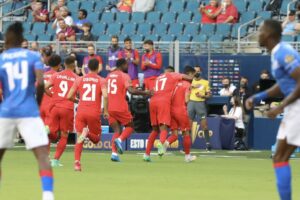 The CanMNT advanced to their third-straight Gold Cup quarterfinals appearance thanks to a dominant second-half performance. Their sheer brilliance combined with great speed, in particular, played a huge role in Canada winning over Haiti. It is a reason why Canada’s offence was so good and also why Haiti conceded two penalties.

Haiti did not take advantage of their chances.#HAIvCAN | 1-4 | #GoldCup21

Canada’s offence was on full display

Canada’s offence was a combination of sheer brilliance and terrific speed. The first goal in particular was probably one of the best goals scored in the tournament.

Stephen Eustáquio’s free-kick in the fifth minute was fantastic. His shot hit the bottom left corner (link to the goal for American viewers). There was nothing much the Haiti goalkeeper Brian Sylvestre could do to stop the shot. Canada actually did not have many chances in the first half. Doneil Henry and Jonathan Osorio also got shots off but were off-target in the first half. It was the second half when Canada put pressure on the Haitians.

It all started in the 51-minute when Tajon Buchanan blew past a Haitian defender and got close to the goal. He then tries to pass it to Lucas Cavallini but was stopped by another Haitian player. However, the ball ends up in Cyle Larin’s possession. He got a terrific shot off and scored Canada’s second goal (link to the goal for American viewers). Huge credit to Buchanan should be given for that goal. The Haitians would reply with a goal of their own in the 56-minute.

Canada has great speed, but Haiti made some bad challenges in the game. Also, Canada started to generate chances when substitutes were made to make a difference in the game. As a result, Haiti ended up conceding two goals thanks to two penalties conceded. The first penalty conceded was initially not given by the referee.

As one can see from the replay of the OneSoccer video, second-half substitute Richie Laryea was tackled by a Haitian player. It was not a malicious challenge, but the Haitian player did not make contact with the ball. This resulted in a penalty for Larin. Larin’s shot went into the back of the net and Canada took a 1-3 lead in the 74-minute (link to the goal for American viewers).

In the 77-minute, Canada made a few substitution changes. This included substituting Larin out for current Toronto FC player Ayo Akinola. This was Akinola’s first game with the Canadian men’s national team and he made a big difference.

Huge credit should also go to Eustaquio, who gave a terrific pass to Ayo Akinola to put him in that scoring position (link to the goal for American viewers). This forced Haitian player Francois Dulysse to bring Akinola down. This resulted in Dulysse getting a red card. This probably sealed the game for Canada. However, Junior Hoilett was the one who put the game away. He was able to get the goalkeeper to go the other way and score the final goal of the game.

Haiti did not take advantage of their chances

The scoreline does not do justice for how well Haiti played in the first half. They actually had more chances to score in the first half than Canada. Their first chance came in the 16-minute when Leverton Pierre shot was easily saved by Maxime Crépeau. The Haitians would also miss the target in the 36 and 37-minute of play.

They also started the second half strong against Canada. They had three shots from the 48 to the 56-minute. This included CanMNT goalkeeper Crépeau, who saved Etienne Jr.’s shot in the 48-minute.  There was also a chance for Ronaldo Damus in the 53-minute. The chance was created off a Canadian turnover. Unfortunately for Haiti, this was a chance they should have put away. The goalkeeper was beaten, but Damus was unable to find the target.

In the 56-minute, CanMNT struggles continued. Canada was unable to clear a corner. This resulted in Haiti getting a goal in the 56-minute scored by Stéphane Lambese (link to the goal for American viewers) and assisted by Derrick Etienne Jr. After that though, Canada made some substitutions and took over the game. Even still, Haiti had four shots on goal and 10 shots. They could only generate one goal out of that though.

This was mentioned before, but the substitutions Canada made after giving up a goal were key to winning the game. It played a catalyst to the Haitians conceding two penalties to Canada. Both of those penalties ended up being goals for Canada.

28′ #CanMNT goalkeeper Maxime Crépeau comes up with a big save to preserve Canada’s lead!#HAIvCAN | 0-1 | #GoldCup21 pic.twitter.com/aUE1dgZb8t

There was also the save made by Crépeau that preserved Canada’s lead at the time. The terrific save happened in the 28-minute. He looked sharp as he made three saves for the CanMNT.

While this is not a factor for determining the game, CanMNT’s defence does need to improve. After a positive start, they did not look comfortable defending, which can also be seen when Canada faced Martinique. This continued until Haiti scored their goal in the 56-minute. The substitutions made did make a difference, but it is something that Canada should be aware of.

This will be CanMNT’s third-straight time in the Gold Cup knockout round. Their next game though will be on July 18 against the U.S. Canada only needs a tie against the U.S. to win the group, because Canada had scored more goals than the U.S. in Group B. The game takes place at 5:00 p.m. ET. Like Canada’s previous two games, the game will take place at Children’s Mercy Park in Kansas City, Kansas. Canadians can watch the game on OneSoccer.

The post CanMNT advanced to the quarterfinals with a 1-4 win over Haiti appeared first on Last Word On Soccer.