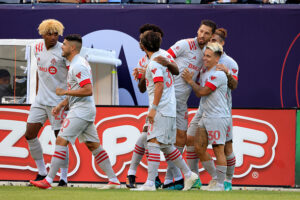 PREVIEW – The Canadian Classique will be extra special on Friday. On Friday, TFC will face CF Montréal at Stade Saputo in Montreal, Quebec. This will be the first time since last year that both teams last played against each other in Canada. In that game, TFC won on the road 2-1 against Montreal.

Homegrowns can only score bangers.

I don’t make these rules. pic.twitter.com/8d5I7DBEjT

CF Montreal is the only Canadian MLS team that currently holds a playoff spot. They are currently sixth in the Eastern Conference with 28 points. Montreal has all the ingredients to be a top-level team. An example of this was against the Philadelphia Union where they got a point on the road. However, Montreal will still be disappointed that they did not get the job done at Subaru Park.

“Given the way the game ended, we obviously would have liked to leave here with the win, but a point against Philadelphia is still good,” said coach Wilfried Nancy. “Tonight remains a disappointment, however, because we almost did something great.”

Montreal gave up a late lead to Philadelphia on the road. Quinn Sullivan scored a goal in the 87-minute for the Union to snatch a point at home. Giving up late leads has been a problem for Montreal, even though they seem to fix that in recent games. The other problem is getting clean sheets. In the last eight games, Montreal only had two clean sheets.

The Good Form of CF Montreal

That cross from Joaquín Torres!

Saying that Montreal is in good form. They are unbeaten in their last five games, which includes winning two games. Also, a win against Toronto could be huge in improving their playoff hopes. Mason Toye is their leading goalscorer with seven goals. This is followed by Djordje Mihailovic who has four goals. Mihailovic is the assist leader for Montreal with six assists, which is followed by Joaquín Torres with four assists.

TFC needs to decide how they want to approach this MLS season. They only have 15 points and are 12 points behind a playoff spot. They also have the worst record in MLS. Do they play the young players, try to salvage the MLS season, or think about the Canadian Championship? There are not many months until the MLS season ends, so a win even on the road is considered a must for TFC fans.

Pizarro making em dance for our first goal of the night!

In fact, this is what TFC head coach Javier Perez said about giving up the first goal to Inter Miami CF.

“Once you concede a goal like that, it’s extremely difficult to pull the team together, especially on a day like today, [where] we are playing away from home, everything is against us.”

None of the central defenders have played well. Eriq Zavaleta gave up two late goals, which cost TFC points against Atlanta United FC and the New England Revolution.

Another trick from The Joker !

@Rpizarrot scores his second of the night and makes it 3-0 for #InterMiamiCF! pic.twitter.com/DXb9KsrL3O

Toronto did not play well against Miami. Omar Gonzalez and Ralph Singh were all over the place as both centre-backs had bad games against Miami. Another concern for Toronto is a lack of scoring.  Ifunanyachi Achara is now their starting striker because of injuries. He is getting a lot of chances to score. However, Achara just came back from a serious injury. He is also relatively inexperienced, so expecting him to score multiple goals for Toronto will be a tall order.

Injuries/Absences for Both Teams

CF Montreal will be missing Ballou Tabla because of a groin injury according to transfermarkt. The left-winger has been out since April 1 and it is not known when he will return. Also, Romell Quito and Lassi Lappalainen will also be missing.

For people asking why i didn’t play last night. The reason is my 4 years daughter had a seizure on monday night so we had to stay at the hospital for the last 3 days. I would to thanks @sickkids for taking care her. Now she’s doing well and hope to be on the field asap. #TFCLive

One player that could play though is Chris Mavinga. It is completely understandable though if he does not play against Montreal. Wish all the best for Mavinga’s daughter as she continues to recover.

Canadian Classique Preview: Both Teams Look to Get All Three Points

Both teams last played on April 17. In that game, Montreal came up with a surprising 4-2 victory over Toronto. That game also highlighted Toronto’s habit of giving up goals. Toronto will need to play well defensively, this is especially true when playing on the road.

A blowout should not be expected in this rivalry game. However, Toronto’s not shown an ability to get results this year. The fact that Toronto cannot score goals will also hurt them. TFC will face Montreal on Saturday, August 25 at Stade Saputo. The game will be televised on TSN and TSN4 and will also be shown on TVA Sports and ESPN+ at 7:30 p.m. ET.