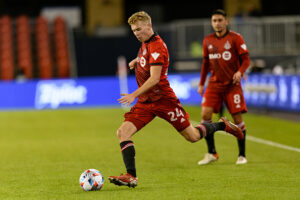 CF Montreal – Barely Missed Out on the 2021 MLS Cup Playoffs

CF Montreal only needed a win at home to make the 2021 MLS Cup playoffs. Instead, they would end up losing 2-0 to a solid Orlando City SC side. Montreal had some chances, including a Victor Wanyama shot that was called offside when they were losing 1-0. This is what the Montreal head coach Wilfried Nancy said about the game according to TSN of the Canadian Press:

“We should have been up 2-0 at the half, but again we have these troubles once we got into that final third,” said head coach Wilfried Nancy. “We were close. Incredibly close. And we have to remember that we did all this without some of our usual attackers.”

Road to the 2021 Canadian Championship Final

Montreal will play their last game of the year at Stade Saputo in the 2021 Canadian Championship Final. They advanced to the Canadian Championship Final with wins over the HFX Wanderers FC (based in Halifax) and Forge FC (based in Hamilton) of the Canadian Premier League. In particular, the game with Hamilton was very close at Tim Hortons Field. Looking at the statistics, Hamilton was the better team within regulation. However, they would narrowly lose to penalties to a decent MLS side at home.

Nancy talked about the game and about the way the game ended according to The Canadian Press.

“It was the first time for me to see it end like this, so I’m going to remember this.”

Toronto FC’s last home game was a forgettable one. TFC’s last home game, if not for it being Justin Morrow’s last game a BMO Field, was a forgettable one. The biggest problem with Toronto this year was their defence. They gave up 66 goals this year, which is the second-most of any team in MLS. The only team worse was FC Cincinnati, who was also the only team with a worse record than Toronto.

I’ve never felt so loved and appreciated. Thank you with all of my heart Toronto!

This is what Morrow said about his final game according to Steve Buffery of the Toronto Sun:

“A little bit of everything, mostly joy,” said Morrow, when asked what it was like playing his final regular-season game on a beautiful autumn day at BMO Field in front of 19,351 adoring fans. “It was incredible. It felt like the old times out there. I’ve felt that rarely since the pandemic (started) so it was nice to go out like that.”

He also talked about the team pressing in the second half but was unable to come away with a result. However, he thanked the fans and their support over the years.

TFC had an easier time than Montreal to the final. A large part of that was Toronto had two home games while Montreal had to travel to Halifax and Hamilton. However, Toronto has never trailed in the Canadian Championship. This was evident in their quarter-final game against York United FC. Toronto had a relatively easy time dispatching York with four goals, two in each half. They would then face a much tougher test with Pacific FC (based in Langford, BC). This is the same team that eliminated MLS-side, the Vancouver Whitecaps FC at Starlight Stadium.

Toronto won against Langford thanks to a strong start in the first half. Jozy Altidore scored in the 15-minute and Jacob Shaffelberg in the 26-minute. This was just enough to get the win. However, Alejandro Díaz Liceága scored late for Pacific and almost scored another goal late in the game. It was a scare that Toronto got past though and is the main reason why they are in the 2021 Canadian Championship Final.

The best player in the Canadian Championship for TFC is Jacob Shaffelburg. Shaffelburg had two assists in the win against York United FC. He also scored one goal against Langford, which ended up being the game-winning goal. He also played a big role in Altidore’s goal against Langford. This is what TFC head coach Javier Perez said about the game according to Northern Tribune:

“They don’t give up. I think any other side would probably go down mentally in the second half, but they didn’t. We knew coming into the game that they wouldn’t give up and that they were going to play till the last minute, and that was in the script, so I’m glad we didn’t shut down mentality. We were able to get the job done.”

Unfortunately, TFC has not been in good form at all. Even with Jozy Altidore healthy, this will be a difficult game to win. If Toronto wins the Canadian Championship in hostile territory, they will need to defend, something they have not been able to do in the 2021 MLS season. Also, Montreal has a favourable record this year against Toronto, winning two of the three games against Toronto and tying at BMO Field.