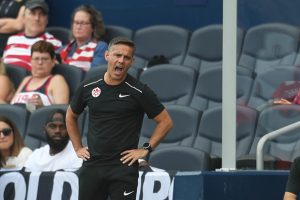 The Canada men’s national team has added another friendly to their schedule as they will also face Bahrain before the World Cup.

On Thursday, Canada Soccer announced that the Canadian men’s national team had added another international friendly to its schedule. They will now face Bahrain in Manama on November 11 six days before facing Japan on the 17 in Dubai.

The match will be played at Al-Khalifa Stadium will part of the November window before the final roster gets named and a final chance for players to book their spots on the plane to Qatar.

In a press release to the Canadian media, John Herdman made the following statement on the news.

“Bahrain have graciously agreed to host us, which provides the team with an opportunity to both acclimate to the Middle Eastern conditions and to gain important minutes at an international intensity for a number of players prior to the FIFA World Cup Qatar 2022

The Canadian men’s team is fresh off a September window that featured a 2-0 win against World Cup hosts Qatar in Vienna before losing 2-0 to Uruguay in Slovakia and will feature players who are out of season most notably MLS players.

Who Will Face the Canada Men’s National Team in the FIFA World Cup?

Canada finished first in Concacaf and booked its spot among the 32 countries for the first time since 1986 and is in a group with Belgium, Croatia, and Morocco. They will face Belgium in their first match on November 23 before facing Croatia four days later on November 27 and wrap up the group stage against Morocco on December 1st. They will be looking to make history in Qatar, including trying to score their first-ever FIFA World Cup goal.

In Canada, TSN as the main rights holder will have full access and coverage and show every single game with TSN broadcasting all three of Canada’s games and will show the international feed for all the others. Luke Wileman and Steven Caldwell will do the play-by-play and colour commentary.