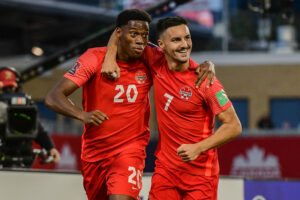 TORONTO, ON – Two early goals from Canada set the tone in their easy 3-0 win over El Salvador Wednesday night. Atiba Hutchinson and Jonathan David both scored inside the opening eleven minutes. Tajon Buchanan added a third in the second half to put the hosts beyond reach. The win gives Canada five points, good for at least third place, while La Selecta is on the bottom half of the table with two points.

Canada easily gets past El Salvador with a 3-0 victory

Canada makes a host of changes to the side that drew 1-1 in Nashville against the USMNT. Centerbacks Kamal Miller and Steven Vitoria join Alistair Johnston in defense. Atiba Hutchinson and Jonathan Osorio are in midfield for Mark-Anthony Kaye and Sam Adekugbe. Alphonso Davies is not in the 18, so the attacking lineup is Junior Hoilett, Jonathan David and Tajon Buchanan.

El Salvador also makes several changes. Eriq Zavaleta is fit and starts after going off with a knock against Honduras. Darwin Ceren is on the bench, but Alex Roldan retains his place in midfield alongside Joshua Perez, Amando Moreno and Narciso Orellana. Jairo Henriquez and Joaquin Rivas make way for Enrico Hernandez and Walmer Martinez who lead the line.

First Half: Two early goals have Canada in full control

Canada scored the opening goal just after five minutes. After a giveaway in midfield, Hutchinson made a near-post run to score a tap-in from a Laryea assist.

The home side would double their lead inside the 10th minute. Off a free-kick, the ball would bounce around until Buchanan launched a cross-pass to David, who headed it in at the far corner. A flying start for the Canadians.

There had been a few skirmishes between teams in the early going. Buchanan went into the referee’s book with a yellow card after 18 minutes, shoving an El Salvador player.

The first half came to end with Canada leading 2-0. Early signs would’ve signalled a rout, but El Salvador settled in after conceding. The pace of Canada is clear for everyone to see and it’s given El Salvador trouble. La Selecta has had to rely on turnovers and has created some decent chances from it, but has yet to hit a shot on target. Chance creation and attacking output have been a negative thus far, but Enrico Hernandez has been lively and had the team’s best chance.

The gap in technical skill is also noticeable, Canada has also won more aerial duels. Manager John Herdman couldn’t have asked for a better 45 minutes, while Hugo Perez will be looking for answers in this second half.

Second Half: Buchanan scores a third as Canada win easily

59′ #CanMNT scores another! Jonathan David creates a turnover and passes the ball to Tajon Buchanan, who puts the ball into the back of the net!#CANvSLV | 3-0 | #CWCQpic.twitter.com/Gvn0bFwEbx

El Salvador enlisted a triple substitution to start the second half: Marvin Monterrosa, Jairo Henriquez and Joaquin Rivas for Larin, Perez and Martinez.

Darwin Ceren came onto the pitch for Moreno, the fourth substitution for La Selecta. Shortly after, Canada would score a third. After an awful pass by Zavaleta, David intercepted and had a two-versus-one. David laid it off for Buchanan who calmly slotted Canada’s third goal of the game.

Hutchinson would make way for Mark-Anthony Kaye and David Wotherspoon to enter for Osorio in Canada’s first changes.

The rest of the match was a stroll as Canada cruised past El Salvador, three goals to nil.

Canada can finish first in WCQ. Seriously, what can stop this team? It’s early, we know this but Canada plays some brilliant football at times. Their attack is dynamic and explosive, led by great players like David and Davies, and Buchanan. Thus far, USMNT and Mexico have been underwhelmed, Canada should see themselves as favorites against the likes of Panama, Costa Rica and Jamaica. They’ve endured two tough opening games and can definitely make way towards a top-two finish in Concacaf.

El Salvador needs solutions in attack and fast. Their giveaways were terrible, it was surprising how flat this performance was. With two points coming from home draws, there’ll be a sense of urgency come October. They need to figure out who their best strike partnership is, and how to get them in spaces to operate and create chances. Three games without a goal, not many shots on target in either game, answers must come soon.

Every team should be nervous about Canada. Plain and simple. The pace they bring in attack, the experience in midfield and the steel in defense will make them a tough game against every side. The USMNT found out how difficult they are. Canada will prove itself against Mexico next month in Mexico, another statement. Watch out for Canada.