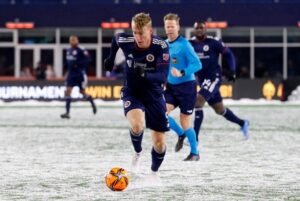 PREVIEW – In the Bruce Arena tenure, there won’t have been many tougher weeks than the one we are coming off of right now. The Revolution may have been without key players, the last two results were both embarrassing. They have a chance to bounce back tomorrow, but it won’t be easy. New England will face new boys Charlotte who are still looking for their first MLS point(s).

The Revolution need to get back on the straight and narrow

As previously mentioned, Charlotte are yet to get on the board. This doesn’t tell the whole story though. The team from North Carolina have a record-breaking crowd roaring them on and as is going to be the case with an expansion project, they’re continuing to put the building blocks in place. In the absence of head coach Bruce Arena, assistant Dave van den Bergh said this to the press: “they’re growing, but they’re going through the growing pains of every new expansion team, but they have some quality players, and we just can’t take this lightly.”

The Revolution have accumulated four points from the three opening MLS games whilst Charlotte are still searching for their first result. They began with a 3-0 loss to D.C. at Audi Field in which Michael Estrada scored a brace before a superb strike from Efrain Alvarez dampened the mood in the home opener. Just like against the Galaxy, it was by one goal Charlotte most recently, Irish international Jake Mulraney coming off of the bench to score the winner for Atlanta in the 96th minute. The saving grace from that game was Charlotte’s first ever MLS goal, the scorer being defender Adam Armour.

“I think when you’re new into the league you want to try to impress your fans and that’s what Charlotte’s going to try and do again tomorrow. They’re going to put everything into this game” were the words of midfielder Matt Polster in the build-up to this Charlotte clash.

The side from the Queen City will eventually get a point or even three, and the form of the Revolution presents a golden opportunity for it to take place this weekend. In Polster’s words, “I’m sure they’re thinking we’re coming off a game in Mexico City that they’re going to try and capitalize on. Their mentality is to try and get three points and our goal is to do the exact same.”

Out of sight, out of mind for the Revolution

It is impossible to discuss this game between the Revolution and Charlotte without touching on the week from hell experienced by the former. They first blew a 2-0 lead in the snow against Real Salt Lake, two very late goals seeing three points turn into zero very quickly. Then, last time out, the Revs went south of the border with a three-goal advantage to face Pumas in CCL. After losing 3-0 in normal time in Mexico City, Arena’s men crashed out of the tournament via penalties, Sebastian Lletget and Tommy McNamara spurning their respective chances from the spot.

For the Revolution, leaving the past in the past is going to be the main task ahead of this fascinating clash. This was a sentiment reinforced by Polster: “you try and have a short mindset, quick mindset, because you don’t have time to really think about the game too much. Obviously, it’s a disappointing result against RSL and a disappointing result against Pumas. You know, it is frustrating, but you have to shift focus quickly. The midfielder’s message being echoed by van den Bergh: “the next challenge now becomes how do we deal with a little bit of adversity? Are we going to let this define us? And let me give you the answer – no, it doesn’t.”

The worst stretch of the 2021 Supporters’ Shield winning season came at the end of June, into early July. They lost to FC Dallas and Toronto FC either side of a draw with Columbus, seven goals being conceded across these 270 minutes. A draw against Charlotte would of course match this and the Revolution have shipped six goals across the two recent defeats alone.

How will New England line-up?

A major question that has arisen from the uncharacteristic consecutive defeats for the Revolution are regarding Bruce’s team selection. Injuries to both Andrew Farrell and Henry Kessler meant that both Jon Bell and Omar Gonzalez, an unfamiliar pairing, were thrust into the limelight. It was a baptism of fire for the defensive duo and it remains to be seen whether the always reliable Farrell is back in contention to feature.

#NERevs We rested players on Saturday, yet Andrew Farrell wasn’t one of those players. We were already thin at centerback with the Kessler injury. We paid for that decision tonight, if Farrell played we would not be out of CCL.

After this Charlotte match, there is an international break which comes at a good time for the Revolution. Whilst it might be early in the season, there are hopes that Matt Turner will be back and fighting for his place along with Farrell and Kessler. Further up the field, it has often looked the same- Arnor Traustason made way for Tommy McNamara at the half in Mexico City and one would imagine that the Icelandic would keep his place as a starter. Adam Buksa has been one of the players to not receive any rest so there is potential for Jozy Altidore to get his first start for the Revs.

It promises to be a fascinating contest in Charlotte. The Revolution are in need of a bounce back and a refresh whilst the hosts will be intent on piling on the misery. Only one can prevail!

The post Can the Revolution turn it on against new boys Charlotte? appeared first on Last Word On Soccer.