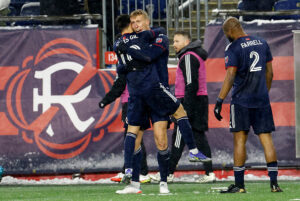 PREVIEW – The New England Revolution may be coming off of a shocking loss to Real Salt Lake, but the CONCACAF Champions League is a different story. The current Supporters’ Shield holders put three past Pumas in the first leg at Foxborough and now the return leg is in store. Can the Revolution bounce back from the RSL loss and see off Pumas?

Will the Revolution bounce back?

Losing any game is a real heartbreaker. However, the manner in which New England did so just adds to it tenfold. In his pre-game presser, Bruce Arena simply stated that “the Salt Lake game is over with, and we move forward.” Whilst this is the ideal head-space to be in, it just isn’t that straightforward. The Revs of course boast a shiny three-goal advantage, but morale must have been in the dumps following the RSL defeat.

One man who was particularly outspoken on the matter was Carles Gil. The Spaniard spoke brazenly after the game, it was childish in truth regarding the conditions and how it was unplayable. ‘It’s impossible to play football today” and “this is not football” were the words of last year’s MVP as well as some expletives and if this is the general mood in the camp, then who knows whether there will be a Revolution bounce back or not.

All time classic interview from reigning #MLS MVP Carles Gil. He is not a fan of games in heavy snow. pic.twitter.com/AWKoyW8QFS

Looking back at the superb season from New England in 2021 and drawing on the stats, it seems like a Revolution bounce back could be on the cards. In truth, they could of course still lose on the night, in Mexico, and qualify for the next stage. The game directly after the loss last time was never another defeat – basically saying that they never lost consecutive games in the regular season.

Bruce Arena on what he expects from Pumas

On what he expects Pumas to bring to the table, Arena said “they’re down three goals in the competition so they’ll be very aggressive and certainly in attack mode.”

Following on from that, when asked about the change in conditions, the record-breaking coach stated that: “the game is different for a lot of reasons. Weather conditions, last game was snowing and probably 30 degrees in Foxborough. Here, it’ll probably be 65 degrees at kick-off on a good field and probably a good crowd.”

A look back at the first leg

Enough with the negativity now and the first leg was unbelievably one-sided. New England swept Pumas aside at Gillette Stadium in a fairly routine way. There were a plethora of chances in the first sixty minutes or so and with just one goal being scored, it was certainly hanging in the balance. At this stage, it could have gone either way with Sebastian Lletget’s strike separating the two teams.

Lletget has averaged 3.2 goals per season and he has 2 through his 1st 3 games for the #NERevs.

Both on late arriving runs into the box. Blueprint. pic.twitter.com/IXTeOwcOSk

This was the USMNT midfielder’s second goal for the club since arriving from the Galaxy in the off-season, here is what he had to say about his time in Boston so far and the mindset of the team.

“Probably one of the biggest things I’ve noticed… is that character that’s in the locker room. I think that’s a championship mentality. It starts from the top with Bruce and the staff, and it trickles down to us.” Lletget also highlighted the role he is taking up: “I’m just rediscovering that creative side of me and the fact that I know I can do it. [Bruce Arena] has been super encouraging on that side, so positive. He gets it out of me.”

Back to the first leg and it was a late brace from Polish forward Adam Buksa that really puts the cat amongst the pigeons. There were a lot of squandered chances in front of goal but a Revolution bounce back was orchestrated by Buksa, a fair few of the misses coming from his boot in fact.

Which players will take the field in this Revolution bounce back opportunity?

It was a much-changed XI in the 3-2 loss at the hands of RSL with these two games in mind. The first side that lined up opposite Pumas was as near to full strength as possible really. The likes of Jon Bell Ryan Spaulding and AJ DeLaGarza came into the team for Bruce with DeJuan Jones and Brandon Bye amongst those that made way.

Let’s watch that back

A number of the Revolution players made their CCL debut in the first leg against Pumas. On this topic, Arena seemed reasonably positive with how they fared. “They did fine, and we had a very good result. Hopefully, we can get that same kind of effort and performance tomorrow, but it will be challenging.” Of course, the wily veteran never gets too high or too low, but this comment and general thinking point towards a similar line-up that secured the three-goal shutout in Massachusetts.

It would be a clear oversight to say that New England is home and hosed, but they currently occupy a supreme position. Everyone was despondent in the aftermath of the loss to Pablo Mastroeni’s RSL and so this is a great opportunity for a Revolution to bounce back, putting the tie beyond a reasonable doubt in the process.

The post Can the Revolution bounce back from the RSL loss and see off Pumas? appeared first on Last Word On Soccer.