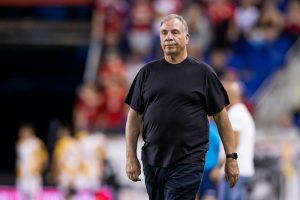 Things went from bad to worse in Houston for the New England Revolution. A win against a Dynamo team already eliminated from playoff contention would have kept the Revs’ own ambitions alive and well. Fafa Picault netted a brace though and so now, Bruce Arena and co really are up against it.

The New England Revolution Have to Win This Weekend

New England’s poor, poor run dates back to the previous meeting with CF Montreal. Whilst that particular outing will be covered later, there have been four losses in the last six. A shock win over NYCFC and a goalless draw with Chicago Fire represent the only points accumulated to date.

It has been a busy week already, the New England Revolution following up a defeat to the Red Bulls with that slip-up versus Houston. This isn’t something plaguing the mind of this team, including defender Jon Bell. “The only motivation we need is that we need to make the playoffs. So, it’s not about what happened last time, it’s about what’s ahead of us. And the point is that we can still make the playoffs, so for us, that’s all the motivation.”

Flipping the script to the opponents and whilst I’m sure they wouldn’t admit it, CF Montreal can take a back seat ahead of the playoffs. Kei Kamara scored a brace against the Fire last night to secure a home match for Wilfried Nancy’s team.

At the same time, they find themselves in an unusual position considering those around them. Philadelphia are seven points ahead of them in first place in the East whilst the Red Bulls are six points behind in third. Three games remain and so whilst there could still be movement at the top of the conference, the chances are Montreal will stay put.

On the face of it, one would assume a perfect measuring stick for this weekend’s game is the meeting between the pair last month. Bruce Arena most likely wouldn’t agree with that given the status of his side at the time. “The game we played in Montreal was one where, in all fairness to our group, we were not able to start a healthy team.”

Gustavo Bou, Maciel and Henry Kessler were amongst those missing from that game along with new(ish) arrival Giacomo Vrioni. Kei Kamara opened the scoring and a Romell Quioto brace put the game beyond any reasonable doubt. Prior to that one, the Revs had won six on the bounce against the Canadians and so will be hoping to get back to winning ways.

In 2020, Kei Kamara fell out of favor with Colorado and was traded to Minnesota. He didn’t play a ton there and finished the season with 4 total goals. In 2021, was unsigned & played in Finland.

Going back to Arena and he spoke very highly of the opposition for the New England Revolution. “[Romell] Quioto and [Kei] Kamara are two physically strong, active front runners. So, we have to do a good job against them and take away some of the service as well. But they are having an outstanding year.”

Bell also spoke on the form and threat posed by Kamara, a true MLS veteran. “You’ve got to just be smart, read the play early, and try to keep him off his balance as much as possible. We know he is a threat in the air and he might get his chances, but we just have to be smarter and contain him as much as we can.”

New England could win these final three regular season games and still not make the playoffs. That is the truth of it all. At the same time, the team seem to be in high spirits. “Our heads are still high” were the words of Bell. They have to beat Montreal at Gillette Stadium this weekend!

The post Can the New England Revolution Return the Favour Against CF Montreal? appeared first on Last Word On Soccer.