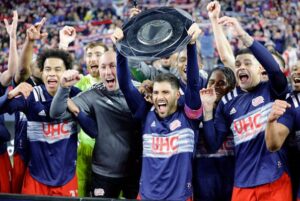 Foxborough, Mass– As recently as a year ago, the New England Revolution was a fairly run-of-the-mill team in MLS. That is no longer the case for Bruce Arena’s side though having just romped to a record-breaking regular season. Their outstanding seventy-three points haul saw them surpass the tally of the 2019 LAFC team (72) and the 2018 Red Bulls (71). The Supporters’ Shield has gone to New England for the first time ever, will MLS Cup follow suit? I got in touch with some fans of the club and asked them a few questions…

It was a remarkable regular season for the Revs with the highest of highs and not many lows. Whether it be putting five past Inter Miami or four past FC Cincinnati and CF Montreal, or even the high-scoring victories over the likes of NYCFC and DC, it was a campaign of rich success for New England. Nashville SC was the only side to really have the number of New England, beating them at Nissan Stadium and then drawing on the road, shutting the Shield champions out in both. Gary Smith’s side gets their playoff campaign underway against Orlando City, the pair could be set for a monster Conference Final clash!

Can the New England Revolution deliver in the MLS Cup Playoffs?

Would a double make this Revs side the best in MLS history?

The prospects of a double are truly mouth-watering, especially given the lack of trophies in Foxborough. On the surface, New England swept the whole field aside. However, as one fan pointed out, there were ‘only four multi-goal wins so we were holding our breath in every match.’ This suggests that the regular season wasn’t as straightforward as it seemed. Not many teams have achieved a Shield and Cup double though, so maybe how you achieve it isn’t as important.

‘I wouldn’t bet on this Revs squad against TFC’s treble trophy-winning 2017 squad’ is what one Revs supporter had to say and that is a fascinating point. Other teams that are in the question from recent years include the two previously mentioned sides, LAFC and the Red Bulls. Not all fans are as modest though with the following being said ‘I’d argue it is already one of the greatest and a double would probably solidify the teams place at the top’, plus ‘if they turn it on in the playoffs and blow out teams in their way, they may be considered the greatest MLS team ever’.

The latter train of thought was something that a number agreed on, one saying ‘a double would make them the greatest team in MLS history, until the records they set this year will be broken by someone else.’ Another echoing these sentiments; ‘’Both sets of silverware [would be] evidence, this is a team that makes its own victories, rather than having to rely on opponent mistakes to make their moves.’ This point in particular resonated with me, New England has forced the issue time and time again under Bruce this term no matter who stood in the way.

How far will New England go?

There is no point comparing the Revs to teams of the past yet though, it is arbitrary in truth given that MLS Cup is yet to be won. When I spoke to Brad Friedel recently, he stressed that ‘you never know what’s going to happen in the playoffs, it’s flip-of-a-coin stuff sometimes’, it really is a lottery. That doesn’t stop the New England loyalists from predicting greatness. Getting to MLS Cup was the minimum for a lot of them, one saying that ‘barring injuries, the Revs will make it.’

Brad Friedel spoke to @rookiejnr13 about his time managing #NERevs, their record breaking 2021 season, the state of the #USMNT ahead of #USAvMEX and more: https://t.co/xrpqfCANqT pic.twitter.com/pknYpofayK

I spoke to one fan prior to the final game and he said that due to it coming ‘after such a long break’, that game against Orlando would play a big part in his thinking. The brazen nature of the chatter leads to a very true quote in my eyes, there is ‘no reason we shouldn’t be able to win it all.’ Another outlining that ‘Arena is a master at the MLS playoff run so I think he knows how to flip that switch.’

The contrast in a glass-half-empty and glass-half-full approach was evident. One supporter said ‘I expect the Revs to win the East at a minimum’ whilst another said ‘the Revs are bounced in the conference final’, going on to compare them to the aforementioned LAFC side under Bob Bradley. A comment that caught my eye was ‘if they don’t [win MLS Cup], it has been a disappointing season, even with winning the Supporters Shield.’

Who will be the key players?

There are a number of players who have excelled in New England colours this season, coming from all over the pitch. Whether it be relative unknowns like Brandon Bye and Tajon Buchanan or the trio of superb DPs, all have played a significant role in this newfound success. Adam Buksa, one of the three Designated Players, cropped up over and over again. However, the Pole’s status came with a caveat: ‘if we can stay healthy’. One fan said that ‘we saw in their last game against Inter Miami that they do not have a dominant aerial threat.’ From a personal opinion, I was surprised to hear very few people sing the praises of Tajon Buchanan.

Arena says Adam Buksa played two games with the injury that currently has him sidelined (that would include his two-goal performance in Orlando) and he’ll be healed up in time for the playoff opener on November 30: “We know he’s going to be okay.” #NERevs

‘Carles Gil stands out to almost anyone new to soccer with his assists, footwork and confidence.’ This is oh so true of the diminutive Spaniard, he was a perfectly capable player in Europe and is the crème de la crème since crossing the pond. Gil is the obvious answer as many pointed out, thus it is good to see several others get a mention. One of those being Gustavo Bou; ‘I really think that Bou will have to be performing above and beyond what he has done so far. Without him scoring in every game our chances are bleak.’

The final pair of players who were outlined share a first name. ‘Matt Polster will cover us defensively and generate turnovers to jump-start our counterattack.’ As was accurately pointed out, ‘he won’t get the glory but he will surely deserve it.’ Goalkeeper Matt Turner is the other man in question, one fan feels ‘he needs to be the standout player if the defence does what it sometimes has done this season where it seems like it switches off sometimes.’ Another saying ‘it could come down to a pk save, or some other superhuman effort to keep the ball out of the goal.’

Who are the teams to beware of?

It has been said over and over again that all New England has to do to go all the way is to play their best. That being said, Bruce’s men will face some stiff competition if they are to deliver a double to their adoring fans. Talking of the people that matter most and on to who they are wary of crossing paths with. ‘I fear Nashville the most because they are extremely well-coached and have a stingy defence which is what any successful playoff team needs.’

Several others thought along the same lines and shouted out the team spearheaded by Hany Mukhtar. One supporter said Nashville on the basis that ‘that’s the only Eastern Conference playoff team we haven’t beaten this season’, another pointing out that ‘the Revs have struggled to break down teams who sit eleven behind the ball and Nashville is arguably the best in the league at that.’

One week from this very moment

Playoff soccer is back in Nashville pic.twitter.com/rTJkQV0jWA

Another went in a very different direction, surprising me, to be honest by saying that they ‘think [their] biggest rivals in the New York Red Bulls will be the biggest surprise, seeing how they just snuck into the playoffs after only losing one in their last thirteen (against Columbus).’ Moving on, another said ‘I fear NYCFC and Orlando City SC. Both of these teams have incredibly skilled players and are both in the top in the MLS standings.’ Taty Castellanos who plays for the former was crowned the Golden Boot winner on decision day whilst the latter boast the likes of Nani and Daryl Dike going forward so both shouts are wholly valid.

Which teams could be the surprise package?

Going from teams to fear, and down a different route, to surprise packages. Nashville, NYCFC and the Red Bulls all cropped up again with similar reasons being cited. Like the Red Bulls, RSL left it late in terms of qualifying and one New England fan said this: ‘I think Real Salt Lake will shock MLS and defeat Seattle in the first round.’ This certainly is a bold statement given the prowess of the Sounders in the post-season, particularly during Brian Schmetzer’s tenure.

‘Colorado definitely surprised me this year and honestly, I could see them doing really well in the playoffs.’ Next, with a varying spin on it, to underwhelming surprises. One Revs man stated the following: I think the team that will surprise us for the worst would be Vancouver, even though they have a squad full of MLS experience, I don’t think they have the level of the squad for the playoffs.’ Let’s hope none of the teams named come back and bite New England on the backside.

That is a wrap on the post-season predictions for the New England Revolution. It is a fascinating insight to speak to fans of the club as opposed to neutrals. Some were pretty languid and relaxed in their thoughts whilst others adopted confident energy. So, how will it play out? Nobody knows, and that is the beauty of it all!

The post Can the New England Revolution deliver a coveted double? appeared first on Last Word On Soccer.