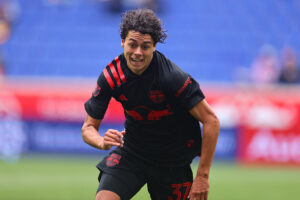 Game Summary:#RBNY were clearly the better team in the second half.#TFCLive had five shots, but only one shot was on target.

From a TFC fan perspective, the first half was more competitive. However, it felt TFC had trouble getting any momentum going in the second half. The Red Bulls in total had 11 shots with three shots being on target. It all started in the 65-minute when Dru Yearwood’s shot was high and off target.

Then late in the game the Red Bulls had three chances to win the game. Cristian Cásseres Jr, Omir Fernandez, and Yearwood all had chances to score late in the game. Unfortunately, for New York City, they were unable to capitalize. However, it prevented TFC from getting any momentum to try to create a late second half comeback. Toronto only had one shot in the second half. This was Jayden Nelson in the 53-minute, whose shot was off target.

Toronto FC only had one shot on target

TFC only had one shot on target. This was in the 23-minute, when Michael Bradley’s shot was saved by New York City’s goalkeeper Carlos Miguel Coronel.

They would get plenty of other chances to score in the first half. In the ninth-minute, Ayo Akinola’s shot from a dangerous position was off target. That was probably Toronto’s best chance to score in the game. Bradley would get another shot in the 23-minute and Laryea in the 29-minute. However, both shots missed the target. Jayden Nelson’s also had a hot in the 11-minute, but it was blocked by the Red Bulls.

There are two important statistics in this game that might be overlooked. One was that the Red Bulls had 54.8 percent of the possession compared to TFC’s 45.2 percent. The other important statistic was New York having 70.2 percent of the passes completed compared to 65 percent for Toronto. The difference in passing percentage was much larger in the first half and it played a role in the Red Bulls first goal of the game. Former TFC player and now TSN soccer commentator Julian de Guzman noted this when reviewing the first half between the Red Bulls and TFC.

For example, in the 17-minute Nick DeLeon’s was surrounded by three Red Bulls players. This resulted in a DeLeon turnover. Marky Delgado also gave the ball away in the 24-minute.

32′ Frankie Amaya scores the opening goal for #RBNY with a perfectly-placed goal in the bottom left corner.#RBNYvTOR | 1-0 | #MLS pic.twitter.com/6ip4NwlBKW

In the 32-minute Delgado would give up the ball to Caden Clark. However, this time the turnover led to a Red Bulls goal. Clark passed the ball to Brazilian Fábio Roberto Gomes. Gomes would then pass it to Frank Amaya for the goal. This was Amaya’s first goal as a Red Bull. TFC would turnover the ball again in the 34-minute. However, Gomes could not connect on a Cristian Cásseres Jr. cross-pass to double the lead at the time.

The Red Bulls were the more energetic team against Toronto. Also, Caden Clark stepped up as he scored his sixth MLS goal with the Red Bulls. It looked like Toronto was the better team to start off the game. Unfortunately, for Toronto, that momentum was not maintained, especially in the second half. Toronto only had one shot on goal for the entire game.

This is the first time Toronto has been winless in their first three MLS season games since the 2012 MLS season. However, keep in mind that only three games have been played and things can change as the 2021 MLS season unfolds. TFC are also experiencing lots of injuries and absences from notable players like Alejandro Pozuelo and Jozy Altidore.

Yeferson Soteldo made his TFC debut as a substitute in the second half. He had a few good touches and showed some of his quality. He did not have an impact though in changing the result of the game.

This is while Toronto FC have some big games coming up in the next seven days. First up are their Trillium Cup rivals, Columbus Crew SC on May 12 at 7:00 p.m. ET at Exploria Stadium. The game against Columbus will be televised nationally on TSN1 and TSN4. They will then travel to New York City to face rivals New York City FC on May 15 at 1:00 p.m. ET.

The post Caden Clark is the player of the game in 2-0 win against Toronto FC appeared first on Last Word On Soccer.