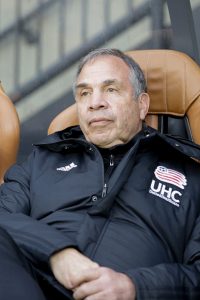 2022 has been a year of a few highs and many lows for the New England Revolution. Following that 1-1 draw with the Chicago Fire on Decision Day, the season drew to a close. It wasn’t quite the same as 2021’s record-breaking Supporters’ Shield win. Here is what head coach Bruce Arena had to say on the season that has been and the season that will soon come.

Bruce Arena Talks Through the Highs and Lows of 2022

Where Did It All Go Wrong in New England?

On numerous occasions this year, we have heard Bruce Arena cite injuries as a leading cause of his team’s downfall. Whilst it would be easy enough to label this as a standard excuse, there is a lot of truth in it. Ismael Tajouri-Shradi is a prime example of this. The Libyan winger picked up an injury before he could even get on the field for New England. He “Has been in Germany for about three or four weeks rehabbing an injury that is potentially career-ending for our sport, and we’re hopeful that that is not the case.”

The list carries on and goes far beyond Tajouri-Shradi, who joined from LAFC. Matt Turner, Henry Kessler, Andrew Farrell, Gustavo Bou, Dylan Borrero and Giacomo Vrioni are just a handful of the names that come to mind regarding this.

Everything Bruce Arena touched on during his end of season press conference.

Injuries played a part but there is much more to be said for the awful showings from Bruce Arena and co. He is perfectly aware of this too. “The final minute of that last game [Oct. 9 at Chicago Fire FC] was probably my impression of the season. We just made too many mistakes that cost us valuable points throughout the year. And, as you know, we were among the league leaders in not being able to hold on to leads and that really was the story of this season.”

Arena went on to say the following. “We also gave up 12 penalty kicks, which I don’t even know what the record in the league could be in a season, but we’re right up there with that. So, there were a lot of mistakes made defensively. But having said that, in the attack, I don’t think we were as good as we could have been.” He mentioned injuries once again and understandably so given that players all over the field were absent at times.

Bruce Arena Looking Ahead to Next Season

2021 to 2022 is quite the drop-off for the Revs. The questions now crop up of which one of these two years is the anomaly? With some good off-season deals, can the Revolution return to contention? Will it be another miserable year in New England? In all honesty, the answer probably lies somewhere between the two.

This was a year of mass change by Bruce Arena when it comes to the players at his disposal. Jozy Altidore, Sebastian Lletget and Omar Gonzalez all came in with a lot of expectations in the off-season only for the latter, the worst performing of the three, to be the last man standing. Altidore will retain to Massachusetts when his loan in Mexico expires but if Arena’s words are anything to go off, it won’t be for long. “I know he has an interest in perhaps going elsewhere and we’ll work with him to see if that’s possible.”

Interestingly, there are a few players being let go ahead of the new year. Clement Diop, Edward Kizza, Wilfrid Kaptoum and Emmanuel Boateng saw their contract options declined with AJ DeLaGarza, Nacho Gil and Brad Knighton’s deals also running out. The biggest shock has to be that Ema Boateng won’t remain a Revs man. Fans on social media weren’t too impressed, with one saying “What!?! Bad decision I believe! #bringhimback”.

In the case of Boateng, Bruce Arena has always spoken highly of him though, and continues to do so. He told the Ghanaian winger this, “Regardless of whether you come back to New England or not, you should explore the opportunities you have in free agency.”

MLS Cup Playoffs commence this weekend and those of a New England persuasion will have to watch on from home. There is set to be a lot of changes in the Revolution organization, but Bruce Arena is one man who isn’t going anywhere. “Because of the fact that we had a disappointing season, I don’t like that. So, it’s a pretty easy decision to come back and try to make things better”. Stay tuned for further news on the Revs’ 2023 season!

The post Bruce Arena Looks Back on an Underwhelming 2022 For the New England Revolution appeared first on Last Word On Soccer.