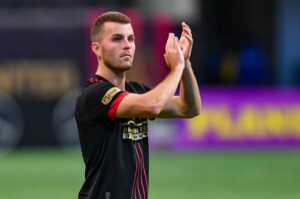 Ahead of this weekend’s trip to Chicago, the Five Stripes are stuck in 10th place in the Eastern Conference with just two wins from their 10 games so far. That said, they have only lost twice as well, with a lack of goals and late defensive slips ultimately resulting in a frustrating number of draws.

But that isn’t for the lack of trying on Lennon’s part with the former Real Salt Lake man creating no fewer than six chances during Atlanta’s 0-0 draw with the New York Red Bulls last time out — at least four more than any other player. 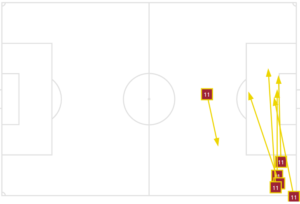 In fact, only Carles Gil has created more chances than Lennon (33) throughout MLS so far this season, with the Spaniard laying on for his teammates a ridiculous 61 times. Those 33 chances have accounted for 2.3 Expected Assists — at least 1.2 more than any other Atlanta player — and if not for some wastefulness in front of goal from his teammates, Lennon would undoubtedly have been credited with more than his single actual assist.

Though much of the team is yet to click under Heinze, there’s no doubting the former Argentina international has had a huge influence on Lennon’s game given he used to play full-back for the likes of Manchester United and Real Madrid.

“We have a new coach that I’ve learned a lot from already and I continue to learn every day from,” Lennon said of Heinze during a mid-week press conference.  “It’s great that he was an outside back, so I can learn a lot from him through just the position itself.”

Indeed, as illustrated by his heatmap below (via SofaScore.com), Heinze has given Lennon the freedom to push forward this season in a manner last seen in Atlanta from Julian Gressel, whose creator-to-goalscorer partnership with Josef Martinez yielded a league-high eight goals during the 2019 season. 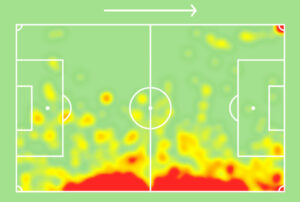 Lennon has demonstrated that he’s an elite crosser and proficient ball carrier. If Atlanta can get Martinez a little sharper and find more output from those around him, there’s no doubting the 23-year-old will become one of MLS’ top providers.

On the influence of Heinze on his game, Lennon added: “I think, offensively, he gives me a lot of freedom, which I really like because I have a very attacking mindset as a full-back. I’ve created a lot of chances this year so far and that’s one thing that I’ve really enjoyed this season, the freedom that I have going forward.”

Does Brooks Lennon have a national team chance?

Though right-back is already a very congested spot, Lennon admits he is hoping to get a call up to the Men’s National Team at some point in the near future.

“I set goals at the beginning of this season to go and accomplish,” said Lennon, adding: “I set those at the beginning of the year and I strive to achieve them. I’m coming into work every day to work as hard as possible and be the best player I can be to hopefully, in the future, be in there on the National Team and be at the heights that I want to be at.

“I’m just keeping my head down, working as hard as possible every single day and good things are going to start happening.”

Ready to represent the Stars and Stripes

The likes of Sergiño Dest, DeAndre Yedlin, Reggie Cannon and Bryan Reynolds are all ahead of Lennon in the USMNT right-back pecking order at present. But Lennon revealed he’s already had a “good conversation” with Berhalter and insisted the competition for places will only serve to bring the best out of him, rather than presenting a hopeless task.

“I had a good conversation with Gregg two days ago on the phone,” said Lennon. “There is a lot of competition in that position but, as I’ve always said, I thrive off competition and you know you’re going to get competition, anywhere in the world, especially at the National Team level.

“I’m a versatile guy, I could play multiple different positions and that definitely goes to my advantage with the National Team.”

With so many MLS players named on the Gold Cup roster, as well as three Atlanta teammates, Lennon admitted it was tough to be left off. But he vowed to “keep fighting” to make sure Berhalter gives him his chance soon enough.

“[I was] disappointed to miss out on the Gold Cup roster but as I said earlier, I’m a warrior,” he said. “I’m not going to give up. I’m going to keep fighting every single day and I know that chance will come because I believe in myself.”

The post Brooks Lennon in Berhalter’s USMNT plans after thriving under Heinze appeared first on Last Word On Soccer.