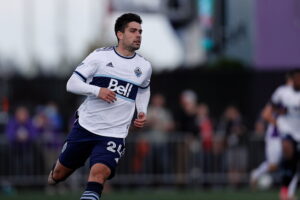 As teams start the final stretch of the 2021 season, a lot has been undecided in a very close Western Conference. Vancouver Whitecaps are in the midst of a franchise-best run of form. This is while their opposition, the San Jose Earthquakes, was looking to make up ground in the playoff chase. Both teams are on the outside looking in as the weather starts to get cooler, with a big tilt set for BC Place on Saturday night.

Vancouver came into this one looking to continue their hot streak of just one loss in their last 14 league games. Interim head coach Vanni Sartini made seven changes from the Whitecaps’ 0-0 draw with Houston on Wednesday. A full change to the front five, with Christian Dajome, Deiber Caicedo, Brian White, Bruno Gaspar and Ryan Gauld all making their returns to the starting 11.

Long-time Earthquake Florian Jungwirth made his first appearance against his former team with his selection, racking up over 120 appearances for San Jose. Notable absences for the Canadians included Erik Godoy, Ranko Veselinovic, and Lucas Cavallini, whose recent call up to the national team raised eyebrows considering that he’s still recovering from a knee injury.

For Matias Almeyda’s side, a chance to leapfrog Vancouver and lay within touching distance of the playoffs was on the line. A near-identical lineup to Wednesday’s 3-1 loss to Seattle, minus former Whitecap Shea Salinas making way for Luciano Abecasis at right back. Christian Espinoza also slid into San Jose’s attack in replace of Carlos Fierro. The last time the Quakes visited BC Place was August of 2019, resulting in a 3-1 win for the visiting Californians.

A back and forth opening thirty minutes had both sides finding their attacking stride. However, it took 26 minutes to find an opener for the hosts. Great build-up play from Leo Owusu found a streaking Gauld through on goal. James Marcinkowski made the initial stop, however, Brian White’s follow-up attempt found the back of the net.

It was the American’s seventh tally in a Whitecaps shirt, and third in his last four games. That would be the only tally of the first half, with a lack of substantial events through the first 45.

Less than 15 minutes later, White doubled his tally with his second on the night and eighth on the year, tying Dajome for the team lead in MLS goals in 2021. A free-kick whipped in by Gauld found the head of the leaping American, knocking it past Marcinkowski. An immediate response by Almeyda, by bringing on four substitutions almost immediately.

Carlos Fierro, Chris Wondolowski, Cade Cowell and Andres Rios were all introduced together, with the Vancouver faithful having flashbacks to a similar situation at last year’s MLS Is Back tournament.

To put out any chance of a San Jose comeback, Brian White completed his first career hat-trick in the 73-minute. A Ryan Gauld corner found the head of White once again to cap off a complete and thorough team and individual performance. White now leads Vancouver in MLS goals this year and has the same amount of goals as Designated Player Lucas Cavallini (9) in 13 fewer games. And for a lot cheaper.

The final whistle blew with and “Stand By Me” rung around BC Place as Vancouver finished off this one as 3-0 winners. With Minnesota United calling honours even against FC Dallas, Vancouver fans went to sleep just one point outside of the playoff race. Vancouver has been playing well lately, with three wins in their last six games. This included a 2-1 victory against Austin FC.

Next up, a date with their Cascadia rivals Seattle next week from Lumen Field, followed by a difficult home clash with Sporting KC. While it is a difficult game coming up for the playoff push, Vancouver is rolling into it the best way they know-how. Off the back of a big home win.

For San Jose, the hill to the playoffs just got a lot steeper, however upcoming games against LAFC and Austin will soften the blow. However five points back with an extra game played aren’t favourable, there still is a path to the postseason for Matias Almeyda and his men. A rematch between Vancouver and San Jose is set for October 23 at PayPal Park, in a growing list of “must-wins” for the Earthquakes.