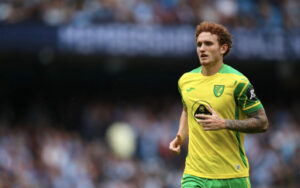 Several of Europe’s top clubs will be seeking a spot in this fall’s UEFA Champions League group stage and can clinch a berth with a positive result this week.

Brenden Aaronson and Red Bull Salzburg is just one of several teams looking to advance in the annual competition, holding a 2-1 aggregate lead ahead of a second leg trip to Danish side Brondby. Aaronson scored the winning goal against Brondby last week at home and will be eager to deliver another heroic performance on road turf.

Jordan Pefok and Henry Wingo face off in UCL play as well this week, knowing one will not be playing in the Champions League tournament. David Wagner’s Young Boys lead 3-2 on aggregate, but visit Hungary knowing that Ferencvaros have been tough to beat at home.

The second round of the EFL Cup kicks off this week with many American players in the mix to feature for their respective clubs. Josh Sargent, Antonee Robinson, and Ethan Horvath are among the American contingent who could see the pitch this week in the knockout competition.

Here’s a closer look at this week’s Top Five to Watch:

Brenden Aaronson delivered a heroic performance in Red Bull Salzburg’s 2-1 first leg win over Brondby and now will look to do more of the same this week. Aaronson’s first goal of the season proved to be the difference in Austria, but Brondby returns home with hopes of knocking out the defending Austrian champs.

The former Philadelphia Union midfielder has found it tough of late to make an impact in league play, but still remains one of Red Bull Salzburg’s top playmakers. Aaronson could square off with fellow American midfielder Christian Cappis, who is in a race to return from his positive COVID-19 test.

Josh Sargent has gone up against Liverpool and Manchester City in his first two appearances for Norwich City, but should find an easier time this week in Carabao Cup play. Daniel Farke’s Canaries face off with EFL Championship side Bournemouth on Tuesday, looking to pick up its first victory of the new competitive season.

Sargent has been a substitute in his first two outings for the Premier League club, but is likely to start with Norwich City sitting as home favorites to advance. The U.S. men’s national team striker will be eager to score his first goal for his new club, especially in front of the home faithful at Carrow Road.

Ethan Horvath has watched from the sidelines in league play for Nottingham Forest, but could make his second cup appearance for the second-tier club since arriving in England. Nottingham Forest faces off with EPL side Wolverhampton Wanderers, providing Chris Hughton’s side a strong chance for an upset at home.

Horvath made eight saves in his club debut, a 2-1 first round win over Bradford City, but could should find Wolves to be a much tougher opponent to keep at bay. The USMNT keeper could surely boost his stock for involvement in September’s opening round of World Cup Qualifying with a strong performance at the City Ground.

SC Caen has won three of its opening four league matches in Ligue 2 so far this season and Nicholas Gioacchini will hope to add to his club’s early success. Gioacchini returned for Caen on Sunday, playing the final 19 minutes of a 1-0 league win over Nancy. The Missouri native is seeking his first goal of the new campaign following his summer involvement with the USMNT in Nations League and Gold Cup triumphs.

Gioacchini may not be included in Gregg Berhalter’s final roster for September’s World Cup Qualifiers, but a solid showing on Wednesday at AC Ajaccio could help fix any worries he may have.

Galatasaray can advance in Europa League qualifying with a winning result at home on Thursday against Danish side Randers and DeAndre Yedlin will be keen on keeping his spot in the club’s starting lineup. Yedlin played 90 minutes in last week’s 1-1 road draw, but watched from the sidelines in his club’s recent 2-1 league win over Monday over Hatayspor.

Yedlin’s experience could be crucial for Fatih Terim’s side at home if the club has any aspirations of avoiding another European exit.

Tyler Adams, Josh Sargent, EPB & CCV debating who is fastest is still one of the funniest videos.

Tyler was so mad