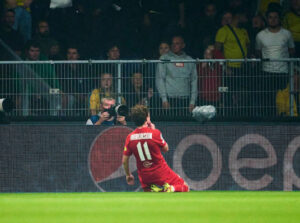 Red Bull Salzburg clinched its place in the 32-team tournament, advancing past Danish side Brondby 2-1 in Wednesday’s second leg qualifier and 4-2 on aggregate. Aaronson scored the second goal in Denmark, giving the defending Austrian champions an early insurance goal on the road.

A terrible error out of the back from Brondby goalkeeper Mads Hermansen allowed Benjamin Sesko to pounce on a poor pass. Sesko chipped a pass into Aaronson’s path in the box, and the U.S. men’s national team midfielder slotted home his goal of qualifying.

BRENDEN AARONSON DOUBLES IT FOR @REDBULLSALZBURG

Andreas Maxso pulled a goal back for Brondby in the second-half, but it wouldn’t be enough to start a comeback.

Aaronson finished the match with 85 minutes under his belt, an 86% passing rate, and three out of seven individual duels won.

The American now joins a lengthy list of Americans in the group stage of the competition, following in the footsteps of Christian Pulisic, Sergino Dest, Weston McKennie and others. Aaronson and Salzburg finished as one of the last teams to qualify for the group stage, joining AS Monaco, FC Sheriff, Young Boys, Malmo, and Benfica who did so this week.

Aaronson has continued to play a lead role for Salzburg despite Jesse Marsch’s departure to RB Leipzig. The Medford, New Jersey native has scored three goals in his last six appearances, including game-winners against Brondby in last week’s first leg and against Barcelona in a friendly earlier this month.

The draw for the group stage is set to take place on August 26 in Istanbul, Turkey.

Here’s a total list of the American players and managers who will take part in the UCL group stage: