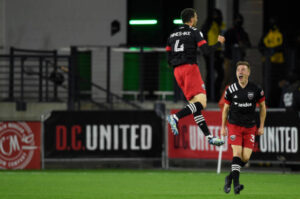 WASINGTON, D.C. – Under the bright lights of the nation’s capital, hometown club D.C. United stunned New York City FC 2-1 on Saturday night. First-half goals from Brendan Hines-Ike and Russell Canouse carried the Black and White to a decisive first victory on the first Matchday of the season. Despite an early goal from Taty Castellanos, NYCFC’s lack of match sharpness and poor play in the final third prevented the Pigeons from a decisive point away from home.

From kickoff, City was dominant in possession and clinical defensively. The first 15 minutes appeared like three points would be the benchmark versus a DC squad that finished second from bottom last season.

This notion was supported in the 15’. Following a throw-in on the halfway line, a beautiful first touch from Jesus Medina set up the overlapping run from Anton Tinnerholm. Tinnerholm put in a low driven cross to the far post that found the foot of both Russell Canouse and Valentin Castellanos. Taty would win the 50/50 and slotted a right-footed shot across the goal line to make it 1-0. From there, three points was well on the minds of Ronny Deila.

Completely against the first 15 minutes, DCU took control of the game on their home pitch. Brilliant, physical center back play by Brendan Hines-Ike, Frederic Brilliant, and Tony Alfaro silenced the Pigeon presence in the final third. The Black and Red were nearly rewarded in the 30’ when an unmarked Brendan Hines-Ike took a strike off a corner, only to be sliced off target. Despite the missed chance, they were rewarded nine minutes later.

In the 39’, Denver born center back Brendan Hines-Ike struck a beautiful shot from 25 yards out past the near post of Sean Johnson to make it 1-1.

The defender, who was picked up on loan from Belgium side K.V. Kortrijk was a highlight of a strong DCU first half. But that wouldn’t be the end of NYCFC’s troubles. Five minutes later, The Pigeons left another player unmarked on a corner. This time it was DCU stalwart Russell Canouse, who took his chance and slotted a side-footed shot to the far post, past the diving arms of Sean Johnson to make it 2-1.

In the first 15 minutes, NYCFC was looking like the dominant side. By the end of the half, they were begging for the halftime whistle.

The start of the second half created a lull in the match, including the first 20 minutes for NYCFC with 70% possession and zero shots.

Nigel Robertha showed signs of promise in his limited showing, including a decisive link-up play in the final third that created one of the very few United chances.

Andres Jasson was also an ingenue for City fans, with the 19-year-old homegrown making his debut. Jason showed determination and confidence out wide despite his lack of experience and gave City confidence in the final third.

Despite the boost off the bench, the second half for NYCFC was highlighted by poor midfield play from U.S. duo James Sands and Keaton Parks. Two potential stars in the youth national team circuit, both had nights to forget as poor passes and decision making made the away match a frustrating one. Sands especially had an off night, with the 20-year-old stopping many breaks and chances before they began thanks to dispossessions and off-target passes. Match sharpness always plagues younger MLS players in the beginning weeks of the season, but the lack of game time seemed to affect the visiting Blues much more.

As was the case as the second half wore on. First-year MLS manager Hernan Losada managed tactics perfectly for the Black and Red, equalizing any City attack, and prevented any late run from the visiting side.

D.C. pull away with an opening day victory, just their second opening match victory in six seasons. Hernan Losada’s side will look to add to their impressive start next Saturday when the Black and Red travelling to the Northeast to take on the New England Revolution. While Ronny Deila’s NYCFC will look to rebound on Matchweek two when they play host to FC Cincinnati next Saturday at Yankee Stadium