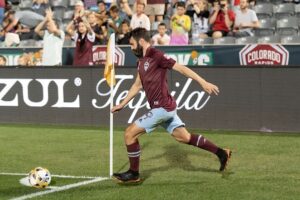 Both teams made changes from their last game. Cole Bassett and Nicholas Mezquida started in midfield for the home side. Josh Wolff rotated the squad heavily. Tomas Pochettino was the only DP in the starting lineup. Andrew Tarbell made his Verde debut in goal. Alexander Ring found himself regularly in the middle of a back three.

Jonathan Lewis had the two best chances of the first half. He missed a first time shot wide right in the 13th minute of a great weighted ball from Bassett. The Rapids had a number of half chances before they scored in stoppage time of the first half. Jack Price got the ball on the edge of the box and crossed to Jonathan Lewis who got the slighted touch on the header. The ball bounced over the line.

Austin didn’t have much going to start the game. They were at their best in transition. Orrin McKinze Gaines II had a shout for a penalty in the 36th minutes. He flew past Lalas Abubakar at midfield and on goal. Abubakar shoved him from behind but he was able to get the shot off which William Yarbrough stopped coming off his line.

The Rapids imposed themselves in the second half. Less than a minute in, Nicolas Mezquida picked off a poor pass from Tarbell and bent it inside the far post to make it 1-0.

Auston Trusty put the game to bed just before the hour mark. Off a corner from Price, he headed the ball, bouncing it off the ground and into the top corner.

Lambs to the slaughter: Wolff played a reserve lineup and they got taken to school. My colleague Mark Turner made a joke before kickoff that Tarbell was going to get hung out to dry. This result was all too predictable for Verde fans.

Back in the win column: Robin Fraser got the performance, response, and result his side desperately needed. We’ll see if this starts a new upward trajectory in form.

Curious officiating: I was surprised VAR did not have the official go to the monitor on the Gaines penalty shout. Lewis getting credited with the first goal rather than an own goal to Nick Lima also seemed a bit off to me.