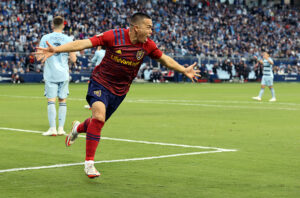 KANSAS CITY, Kan. – Real Salt Lake have played 210 minutes in the MLS Cup Playoffs, led for two minutes of them, and are headed to the Western Conference Finals. Two substitutes played the key role as Anderson Julio leveled the match, and Bobby Wood scored the winner for RSL in the 91st minute, sending Sporting KC packing.

Children’s Mercy Park has long held some sort of ju-ju for Real Salt Lake, and the opponent of Sporting KC has as well. Four times prior to Sunday night’s match, Real Salt Lake had failed to slay the Sporting KC dragon when it mattered most.

Sporting KC took the lead early after Johnny Russell slammed home a penalty kick. Aaron Herrera clumsily hacked Gadi Kinda’s leg in the box and Sporting seemed to be off to the races. But Real Salt Lake responded well and never let the lead get to two. Sporting KC is 18-0-0 when they score two goals. RSL never let it get to two.

In the second half they started playing with more urgency. Deeper runs, better service a strong effort to retain possession, it was all them in the second half and in the end, the scoresheet reflected that.

Anderson Julio subbed into the match in the 58th minute and turned the game on its head. He had speed that Sporting KC couldn’t deal with, and a direct “get to goal” motor that changed the tide of the match. He got the equalizer on a late run into the box right after Bobby Wood subbed on.

As the game got close to extra-time Justin Meram burst down the left flank and found a wide-open Bobby Wood, whose deft touch sent it past Tim Melia putting RSL into the next round.

They’ll face the Portland Timbers in the Western Conference Finals, in Portland, on Saturday, December 4th, at 6:30 EST.