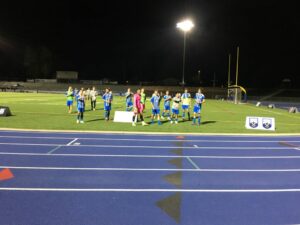 ENGLEWOOD, Colo. – On Friday night, Colorado Rush won their first home game in USL League Two play, playing in the truncated home venue of Englewood High School. Ben Shepherd led the attack with both goals in a 2-1 win. It wasn’t perfect from Ben, as he admitted postgame, but it was spectacular on more than one occasion.

The match was a tale of two halves, possibly a tale of the first 30 minutes and the final sixty. Colorado took a 2-0 lead inside 25-ish minutes. Some great build up play in possession led to the first goal, with Shepherd bending the ball from the top of the box into the back of the net.

His second came off a turnover in the final third. A strong but fair challenge was not called for a foul created the opportunity. Shepherd picked out the bottom corner to score his brace. The UMass Minuteman continued to be the straw that stirred the drink in the final third for the home side, creating chances for himself and others in the second half.

“Ben is a really good player. We weren’t really sure where he was going to be in terms of fitness and form. Scored two good goals and could have had another on a free kick,” Head Coach Elliot Prost told Last Word after the match.

Shepherd is one of a few players who arrived late to preseason. Several arrived on Tuesday, leaving Prost with just three training sessions to prepare for this match.

“I came in late because we made an NCAA tournament run with UMass. I wasn’t the sharpest last week. I was down on myself, but I got some confidence back and it showed tonight,” said Shepherd.

Grinning from ear to ear with that confidence, he said he’d like to average a goal or an assist per game this season and help Rush win the division.

Fitness and The Rush Way:

Park City responded down two goals with direct play and good speed on the wings. They had two goals waved off, one for offside, the other for a foul on the corner that lead to it. Their one valid goal came in the final minutes on a corner. Martin Sanchez had had a fantastic game in goal, but on this play directed the rebound right at an attacker, which deflected in.

Colorado was able to see the match out for the 2-1 victor.

“There’s a lot of things we can work on. We’re not there physically as you saw in the second half,” said Ben Shepherd.

The performances by Sanchez and Shepherd stood out given how the team dropped off for long stretches in the second half. Fitness and cohesion has been an issue this early in the season. Prost confirmed that the team is still waiting for some players to arrive..

At the development level, Rush have historically played in a 3-5-2 formation. With the Rush Way, it’s about possession, attack, and movement. It looked lost a 3-4-2-1 on Friday night most of the time to me. It was great for the first 30 minutes. It was decent for 20 minutes the second half. At times, it wasn’t there at all.

“Right now, it’s more than the Rush Way. It’s what makes the most sense with the players we have and trying to maximize their quality,” Prost said. “We got three points and that’s what we’ll remember about that game. The performance, we can get better.”

I don’t have exact minutes of the goals because the scoreboard was not working in the stadium. The club will be playing the rest of their home games at Denver Christian School. Being in a different stadium for one game, especially your first ever home game, brings issues. Playing in their normal venue, CEO Joe Webb said things will run smoother and these issues will be resolved.

Was it great? No. Did the players and staff make it work? For the most part.

I’ve attended lower league and nonleague games where the National Anthem gets played by someone pulling up a YouTube video on their phone and pointing the PA mic at the speaker. Rush had an actual singer. At least I had access to replay and non-zero wifi in the press box. Hopefully the logistics for everyone are better going forward.

I’m hesitant to judge. I’ve been to MLS and USL Championship stadium openings that were a cluster. I still haven’t watch enough USL outside the Championship to get a sense of the quality of play or matchday experience.

On Friday night, I got to watch live soccer with fans present for just the fifth time since the pandemic started. The game was entertaining.

Like Shepherd, the entire club is doing it live. It’s not perfect, but it’s working.