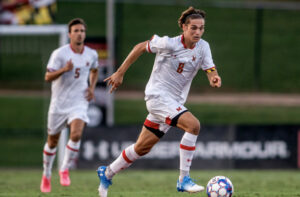 Ben Bender is the latest No. 1 pick in the MLS SuperDraft. The Maryland Terrapin will turn 21 in March and already has an impressive soccer resume in the collegiate game. Now, he will join Charlotte FC, the newest team to grace the league.

Bender, in 2021, made 16 starts in 18 matches. The midfielder scored seven goals and provided five assists for the Terrapins, including a streak of five straight games with a goal against teams like Delaware, Pacific, Michigan State, Penn State and Indiana.

“It’s a dream come true,” Bender, who was unanimously named the Big Ten Midfielder of the Year, said during the broadcast. “I just can’t wait to get started. I know that the football down there is a good brand, and I just want to be a part of that.”

Right after Bender’s selection, FC Cincinnati — who finished the MLS regular-season with a 4-22-8 record — were on the clock. Cincinnati has a new manager in Pat Noonan, a former assistant with Philadelphia, and a new general manager in Chris Albright, who was hired in October 2021. Cincinnati took goalkeeper Roman Celentano from Indiana.

MLS NEXT alums are out here making their names known during the first round of the 2022 MLS SuperDraft. pic.twitter.com/SxYwx5PAAC

Generation Adidas was well represented at the MLS SuperDraft. According to the league, “The program, sponsored by Adidas, offers professional-ready players in the U.S. developmental system not yet eligible for the MLS SuperDraft early entry, allowing MLS to compete with foreign professional clubs without comparable restrictions on player signing.”

Ben Bender reacts to going No. 1 overall to @CharlotteFC.

Three Takeaways from the MLS SuperDraft