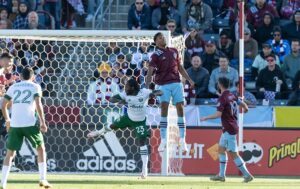 COMMERCE CITY, Colo. – Yesterday Colorado Rapids and Arsenal FC announced that center back Auston Trusty was sold from MLS to the Premier League side. He was then loaned back to Colorado through July 17, a little over half way through the MLS season. This is a massive transfer for the Rapids. For the player, this is the biggest club any American has moved abroad to this January. Let’s break down what this Auston Trusty Arsenal transfer means for all parties involved.

Auston Trusty to Arsenal: What it means for the player, Colorado Rapids, and the Gunners

Honored, excited and grateful to be joining @arsenal

#TrustyTheProcess: Trusty is 23-years-old and played in 33 of 34 regular season games in 2021. After ridding the bench for much of 2020, he developed many facets of his game in 2021. He worked hard in training and embraced what Robin Fraser asked of him. He selflessly played left back several times during the summer when Sam Vines was unavailable. He became better defensively, especially in his anticipation and 1-v-1 defending. His skills on the ball could be improved, but they have gotten better since his arrival at the club.

“Auston is coming off an exceptional season in 2021 in which he played a vital role. We remain committed to bringing through the top young players from Colorado and across the United States and to providing them with a platform to flourish, achieve success in MLS and earn the chance to make a move to Europe. Auston’s outstanding performances caught the eye of several European clubs over the past 12 months,” said Pádraig Smith.

Trusty elevating himself to one of the best young American center backs in MLS was a triumph. Understandably, this led to interest from abroad. If the Sam Vines and Cole Bassett transfers are any indication, Arsenal offered an amount of money club couldn’t say no to and sold the player on the project. If all three of these players can succeed in the 2022-23 season, the Rapids will garner more respect internationally and can reap the benefits of keeping that pipeline going like FC Dallas and New York Red Bulls.

Financial implications: There hasn’t been a good report on how much the transfer fee was. We do know Philadelphia Union will be getting a cut. Colorado most definitely got enough to get the $750,000 GAM they paid Philadelphia back. Over that threshold, that money will hopefully go to fund the purchase of a striker Smith has been speaking about. If the club can make that happen this window, it will need to be huge for the first half of the season. They’ll have the No. 9 they’ve needed, potentially signed with money acquired from selling a player who hasn’t left yet. It probably wasn’t the reported $6 million that Mark McKenzie sold for last year.

Potential and expectations: No American center back has left MLS for a European club this big at this age and fit in quickly. Trusty needs to continue his 2021 progression through the first half of this year. Even if he does that, I’m not sure he’s ready to start for the Gunners come the fall. I don’t think he’ll end up in loan brigade purgatory like Matt Miazga. But a loan across the channel or to the Championship might be a necessary stepping stone. If he ends up becoming a regular for Arsenal within two years, he’ll have exceeded his potential in this writer’s opinion.

A hole to fill by the summer: Aboubacar Keita was a great pick up from Columbus. He’s a viable replacement/understudy for Trusty. Not counting Trusty, Colorado has six signed center backs. Keita has 2695 professional minutes and is 21. Only three others have significant experience at center back, one of those being a 38-year-old Drew Moor. Smith and Fraser need to sign another center back. They have time. The primary transfer window isn’t over. They could also make a signing in the summer as Trusty departs.

Relevance to the USMNT next cycle: Gregg Berhalter is mostly settled in what his top five center backs are for this World Cup cycle. Trusty is on the outside looking in, having not played this window despite being called up. Several players would have to get injured or tank in form for Trusty to get into the conversation for Qatar. Trusty can move up the depth chart if he can establish himself in Europe, even as a loaned Arsenal player. If he can become a starter for the Gunners as Mikel Arteta gets them back into Europe, he’ll be in the conversation as a starter on the backline.

The post Auston Trusty to Arsenal: What it means for the player, Colorado Rapids, and the Gunners appeared first on Last Word On Soccer.