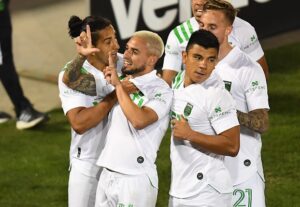 EDITORIAL – Last Saturday, Austin FC clinically dispatched the Colorado Rapids during a second-half, 12-minute, 3-goal blitz, securing the team’s first-ever MLS victory. They then spent much of the remainder of the match reinforcing their identity as a club.

Ball playing from back to front, high pressing all over, quick in transition with multiple points of attack. This, as Verde fans and the rest of the MLS have quickly come to appreciate, is the coach Josh Wolff way.

Being in with the visiting fans for that game is a memory that will live with me forever. All of Austin’s goals, including their historic first courtesy of Diego Fagundez, were scored at our end of the stadium making those memories all the more indelible. The goals themselves were great. But it was the celebration shared between players and fans both during and at the end of the match that made the evening so very special.

Fagundez, at just 26 years old, is somewhat considered an MLS veteran. But in his nine years with New England Revolution, I doubt he experienced anything quite like scoring that opening goal. Fagundez was not expected to start the match. The mysterious absence of Tomás Pochettino presented the Uruguayan with his opportunity. It’s fair to say he made the most of it.

Fagundez’s introduction and impact underscore something remarkable that Wolff and his coaching staff seem to have captured with Austin.

ATX’s Starting XI was missing three of its regulars, losing a 4th to injury, the unfortunate Ben Sweat, midway through the first half. Typically, when players are switched out between games and certainly during, you can expect a degree of disruption. The new player or players take time to get used to the team’s style of play and their role within it. Not at Austin.

When asked about creating a culture, developing mentality where every player on the roster buys into this teams’ approach, Wolff responded, “It’s all based around our offensive principles. People can take up positions but when the understanding is around the offensive principles, there’s just more clarity. You have these coordinated ideas, coordinated movements, irrelevant of what position they play. They pick up a role, they know the role, and then it’s just about executing.”

Is Wolff also suggesting the best form of defense is attack? He certainly doesn’t want his team to let up on offense, even when they’re a couple of goals to the good. That’s something else that marks out Austin’s style on this debut season.

What marks out Austin THE PROJECT as special, though, is the tangible connection the team already has to its city, so evident in its 200+ strong traveling Verde fanbase rocking Dicks Sporting Goods Park last weekend. It’s that culture word again. In the athletic arena, it’s often said that culture trumps strategy. When done right, culture trumps EVERYTHING. And when it extends beyond the pitch, it can contribute to the creation of something significant. Connecting with your fanbase, inviting them to co-create that culture, that can be your difference-maker.

Austin FC skipper Alex Ring gets it. In talking with Adrian Healey recently for the club’s ‘Verde and Black’ podcast, Ring offered his typically forthright views on what fans mean to a club. “You look at the (European) Super League that they tried to start now, and you wonder why? Everything’s about money nowadays. People forget (about the fans).” Ring knows what it means to be a fan of the game. He remembers. “I was in the stands with my father when I was young, we went to every home game. It’s the fans that make the club.”

On the pitch, in the stands, and across the city, Austin FC has an incredible feel-good vibe going on right now. Some people have suggested that Austin represents a new breed of MLS club, or MLS 4.0, or some other baked-online terminology. Austin does have the potential to evolve into something if not unique, then certainly rare in MLS – and highly desirable.

MLS continues to iterate in an effort to become more credible. Credibility comes not from revenue – at least, not primarily – but from authenticity. Austin FC may represent the vanguard of a club that has truly captured that lightning in a bottle. MLS needs to understand how and why?

I suspect Austin FC’s leadership already knows. It’s about a CLUB, not a ‘product’. It’s about COMMUNITY, not a commodity. It’s CULTURE over commerce. You can have a product contributing to a highly successful commercial whole, but only if you put the first things first. When you do that, you get fans, you get a city, you get Austin.