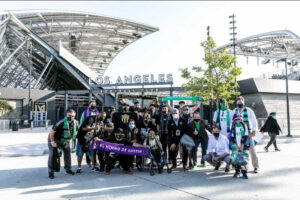 EDITORIAL – Los Angeles FC fans returned to the Banc of California Stadium this past weekend for their team’s opening game of the 2021 MLS season. That, in and of itself was notable. That the stands were also dotted with supporters donning the distinctive Verde and black of MLS’s newest club, LAFC’s opponents on the day, Austin FC, made the scene that much more remarkable.

Away fans were not expected to be at the game, with COVID-19 restrictions making it almost impossible to get a ticket. Even just traveling to California is challenging at present. Regardless, some die-hard Austin fans, fortunate enough to have had both of their COVID-19 shots, weren’t prepared to miss the historic moment when their beloved team took to the field for their first-ever league game.

Trebor Tracy covers LAFC for Last Word on Soccer. He was surprised but delighted to see the Austin contingent:

“Though there wasn’t many of them, there was enough to turn heads. With the number of fans allowed into the stadium not officially announced until a few days before, they made the trip on what was likely no more than three days’ notice. That shows dedication, and willingness to follow the team through everything”.

Josh Babetski was certainly willing, bound and determined. Babetski is the President and Founder of the first Austin FC supporter’s group, Austin Anthem. His journey to this point had been a long one.

Babetski wasn’t the only Verde fan feeling emotional. “I have dreamed about Austin FC’s first game ever since the team was announced,” says Katie Ensign, Los Verdes supporters group board member. “When COVID hit, my biggest fear was that I’d have to miss out on getting to see the team take the field for the first regular-season game”.

Demonstrating the same determination to that of Babetski, Ensign reveals, “I bought plane tickets immediately after the schedule was announced. Even if I couldn’t get into the game, I wanted to try as hard as I could. If I ended up watching the game in a bar in LA, it definitely wouldn’t be the worst disappointment in the world. In the end, things just fell into place and I was so incredibly lucky to have had that experience.”

Austin FC gave a good account of themselves on their debut, though the result didn’t go their way. That hardly seemed to matter to Babetski, though. He had something more important on his mind. He was sharing the trip to LA with his young soccer-loving son. “Legacy and family is part of the reason I did this. Having my son with me to see the talk become real was huge”.

Babetski’s son certainly enjoyed the outing. “It was really fun! The stadium was cool, and I think the team played pretty well, especially in the first half. Everyone was really friendly. Even the LA fans were nice to us!”

Dad concurs. “While the whistle and first kick of the ball is burned into my memory forever, a close second was how welcoming everyone was. We got to hang out with members of the 3252, the District 9 Ultras, and Black Army. One person even swapped jerseys with me! That mutual admiration and respect is a culture we want to have with as many supporters groups as we can.”

And after the game, an added bonus, “We found (team owners and staff) Anthony, Eddie, Claudio, and Andy, who stopped by to enjoy the moment together on their way out of the stadium!”

Another hardcore ATX supporter appreciated the significance of the occasion. Francisco Ordaz runs Twin Oaks TV (@TwinOaksTV), one of several fan-driven YouTube channels that follow and promote Austin FC. “I got to be a part of history”, says Ordaz. “How many fans around the world can say they were there for their clubs’ first-ever match?” And, for Ordaz, the trip was about more than just a game. “The friends I’ve made I would have never had without my love for football, soccer. My favorite memory on this trip has to be filling a subway with Verdes and chanting in unison, flooding LA with the songs of Verde and black!”

Ensign was in that same subway. And much of the noise being generated and flags being waved were in large part due to her and her fellow supporter group travel coordinators. “There were so many moving pieces, and we could not have made it happen without the whole community”. Ensign and co. certainly had their work cut out for them.

“Ordering Verde smoke bombs and picking them up in LA. Funding and hiring someone to fly a plane with a banner around Banc of California Stadium. Buying PVC pipe at an LA Home Depot and assembling flags, then navigating LA public transportation across town with a bombo (drum, for which they had brought a plane ticket!), a snare, 2 trumpets, 10 flags, and 3 banners!” But, it was clearly all worth it to Ensign. “Being a part of this was such a gift. It’s a memory I will treasure forever.”

For the last word, fittingly, Trebor Tracy again. “Establishing yourself away (from home) goes a long way to establishing yourselves as one of the better supporter groups in the league. It was good to see the Austin supporters there, adding to what was already an incredible atmosphere.”

Austin FC travels to Colorado Rapids for game 2 this Saturday, and the scramble for match tickets has begun in earnest. One corner of Dicks Sporting Goods Park, from section 133 to 135, promises to be very Verde. Don’t doubt it.