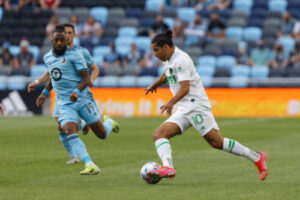 SAINT PAUL, MN – Austin FC had a mountain to climb before a ball was even kicked in this latest encounter in Minnesota. ATX made 4 changes to their starting XI before kick-off, largely out of necessity to rest players following a grueling road schedule and with midweek/weekends games coming thick and fast over the next few weeks. Then, right before kick-off, they lost their influential captain Alex Ring. Sebastian Berhalter stepped into midfield, making him the 3rd player in the line-up making his first start for Austin this season, along with Aedan Stanley and Manny Perez.

Perez was perhaps the biggest surprise. Not so much his inclusion – he’s looked very lively when introduced in the previous two games – more the position he was being asked to play, that of the number 9. Austin fielded a revised 4-2-3-1 shape, hoping to provide Perez with the opportunities to get his name on the scoresheet or create chances for the runners around him.

Even before Nick Lima pulled up lame just 10 minutes into the game, Minnesota were running the new Austin shape and personnel ragged. Two minutes later, the Loons scored their opener, Franco Fragapane with a crisp finish into the roof of the net from close range. This was the first game this season that Minnesota have been able to welcome a capacity crowd. And just seven minutes later, the over 19,200 in Allianz Field were roaring again as Adrien Hunou crashed home a header off an inviting corner from the impressive Fragapane.

Austin created a few chances of their own, but the story remains depressingly familiar. A combination of poor decision-making in the final third and lackluster finishing meant ATX never truly troubled the Loons backline. Diego Fagundez, clearly missing his midfield partner Ring, cut a frustrated figure. He tried to provide a creative spark but was being asked to do too much at the other end of the field – a role usually covered by the team skipper.

The introduction of Jared Stroud at halftime did at least go some way to addressing the decision-making. Stroud presented the Minnesota backline with a new challenge, switching from one side of the field to the other, creating shooting opportunities for himself and others. Still, Austin failed to capitalize. And the subs kept coming, with Wolff presumably casting his thoughts to the weekend already. He admitted as much in the post-game press conference.

Minnesota managed the game effectively, minimizing the Austin threat and countering when possible. When the final whistle went and the first stirring bars of ‘Wonderwall’ rang out from the Loon faithful, it was impossible to argue with the outcome.

Wolff bemoaned the enforced changes tonight. He also commented on the players introduced to the Starting XI. “It was difficult. It was good to see Aedan out there, but they had him pinned in playing narrow first half, but second half he improved. Manny had a good game playing upfront but it was really difficult tonight”.

There seems to be some uncertainly regarding Rodney Redes, though, of whom much was expected following an impressive preseason. Wolff mentioned his knee injury, and that “for whatever reason he just doesn’t seem to have regained that early season form, yet”. Add that to the list of offensive codes Wolff needs to crack if Austin FC are finally going to break their current disappointing run of form.

Blood the youth: With the enforced changes plus those Wolff decided to make to provide necessary rest to some of his starters, Austin’s younger contingent received a baptism by fire. The experience will undoubtedly forge even stronger players.

Running on fumes: And yet, tonight’s starting line-up demonstrated the depth of the challenge facing Wolff. Reinforcements are needed STAT.

The Drought Goes On: Just 6 goals in 10 games so far this season, and no real solution has presented itself. That’s it. I have nothing pithy to add. This is THE problem Austin needs to solve.

Wolff cited the advantage he believes returning to Q2 Stadium this weekend will provide. It’s clear that he and the team already see the benefit of the Verde Vanguard. The Treehouse 12th man will need to be in full voice this weekend if they are to help Austin take anything from Sunday’s match versus current MLS Cup Champions and Austin’s favorite cousins, Columbus Crew.