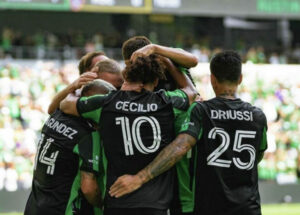 Austin FC put together another highly professional performance at Q2 Stadium last night to register back-to-back home victories for the first time this season. Their latest ‘W’ came at the expense of play-off hopefuls, Real Salt Lake, by a score of 2-1.

After the criticism leveled at Head Coach Josh Wolff for fielding what many had suggested was a weakened side v Colorado Rapids midweek, the Austin coach went all out with his starting picks v RSL. All of the familiar faces returned, including left-back Žan Kolmanic, called up this week to the Slovenian national team for the first time as a member of their World Cup qualifying roster.

Allowing for Matt Besler’s continued absence due to concussion protocol, this was arguably ATX’s strongest starting XI. Though, you might get some argument from Nick Lima, Jon Gallagher, and Dani Pereira, all of whom could’ve made a case for a starting spot. Either way, it was a win-win for Wolff; a strong first-string, with depth-a-plenty on the bench including Jared Stroud, Sebastian Berhalther, and the impressive McKenze Gaines.

The match started cagily, with neither team really grabbing it by the scruff of the neck. The double-pivot of Alex Ring and Tomás Pochettino, teased in Austin’s last home game v LA Galaxy, was working for them. Austin enjoyed better possession numbers, without really threatening RSL keeper David Ochoa.

Then, on 18 minutes, Fagundez surged down the left before slipping the ball into Moussa Djitte. The forward’s loose touch caused the ball to ricochet off a defender and into the path of Sebastian Driussi. Ochoa did well to block the Argentinians shot. The rebound fell fortuitously to Cecilio Dominguez, the DP giving Austin the lead.

The goal woke RSL up. The visitors proceeded to create numerous dangerous chances of their own, primarily down the flanks as Wolff had warned they would earlier in the week. Kolmanic and Hector Jimenez in the fullback roles were exposed a little too readily and frequently by Justin Meram and Aaron Hererra. Fortunately for them, their center backs, and Brad Stuver in goal, Ring was in full ‘Beast Mode’. The Finn made several excellent deep tracking runs, interceptions, and on two occasions perfectly-timed last-gasp tackles in the box.

The second half very much mirrored the first, though Austin looked increasingly threatening on the counter as RSL pushed for an equalizer. And on 56 minutes, the ‘Verde Vanguard’ were treated to a moment of magic. The mercurial Driussi executed a casual-looking first-time flicked pass with the outside of his boot which looped over the RSL backline and into the path of Fagundez. The Uruguayan, alert to the move, sprinted to the box and drew Ochoa, before picking out Dominguez crashing the back post. A hamstring-stretching-lunge was required to apply the finishing touch, but apply it the Paraguayan did.

That ball in behind from @SebadriussiOk.
That cross from @DiegolFagundez.
The brace from @10_dominguez94. pic.twitter.com/SQIjwV1f3T

RSL continued to press for a way back into the game. In the 64th minute, Damir Kreilach notched his 13th of the season, running on to a lovely cushioned pass from Rubio Rubin. Austin continued to create at the other end, too. Gaines could’ve added to his Austin tally. Dominguez almost registered a hattrick. And Fagundez and Driussi both came close – and both would’ve deserved a goal for their outstanding performances. But that was it for the scoring. Not the incident, though.

On the 77th minute, some nifty footwork from Djitte in the corner saw him wiggle past two Salt Lake defenders and head toward goal. In an attempt to recover, Erik Holt fully grabbed the Senegalese striker’s arm, tugging him back, and clipping one of his heels for good measure. Djitte went down, and a penalty was awarded – only then to be called back following a VAR review. Again.

‘It’s a yank of the arm which is a pulling him away from being able to strike the ball. It’s pulling him away from having an advantage, so, again, I’m a little lost for words when it comes to this.’ said a clearly incredulous Josh Wolff in the post-match press conference. Recognizing that ATX have fallen victim to these sort of decisions several times already this season, Wolff continued, ‘It’s somewhat disrespectful. Whether it’s PRO, or whether it’s the onfield committee, whether it’s VAR, that’s what it’s looked like all year and they can’t deny that. So, I’m glad our guys grinded and fought through it, but it needs to be said because it’s bogus. It’s just not right.’

Much was made of Wolff’s selection policy in Colorado. Similarly, many have since noted that 6 points from an 8-day, 3-game stretch that involved playing teams occupying play-off spots represents a highly credible haul. And Austin are starting to gel. Their early season promise, predicated on their attractive and effective style of play, coupled with the return of some key players and the addition of a few others in important positions, is beginning to give Verde fans hope that ATX can finish the season strong and start next season hot. With several long-term injured players to still add to this already competitive roster, plus whatever recruitment takes place in the off-season, those hopes could prove to be well-founded.