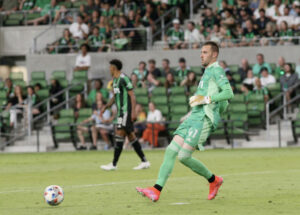 Austin FC is loving their new home. Q2 Stadium opened up first to the U.S. women’s national team in their Summer Series match against Nigeria. In fact, it was Christen Press that scored the first-ever goal in Q2 Stadium history. Austin FC, on the other hand, is still looking for the first MLS goal in Q2 Stadium.

Sitting in 12th place after a 0-0 draw with the Columbus Crew SC on Sunday night, Austin FC hosted San Jose to open up the stadium. That match, on June 19, ended in a scoreless draw. Austin began its season on the road, due to construction to Q2 Stadium, so the team will have its next three MLS matches at their new home.

Austin is still struggling to find goals, and a tough Columbus Crew team did not make the process any easier. Both sides pushed hard for a goal on Sunday night, with Austin recording 17 shots and Columbus trailing shortly behind with 15 shots. Goalkeepers were busy on their respective ends, with Eloy Room of the Crew making five saves while Brad Stuver of Austin FC made six saves.

Austin had a late push at the end with a couple corner kicks. However, the Columbus defense coming up big with header and foot clearances. Room hardly had to get any touch on the ball on the set-piece plays.

With an attendance of 20,738 fans, the stadium was loud and pushed the Austin players on throughout the match. While the team will walk away with one point, Austin FC will hunt once again for its first goal in their new stadium on Thursday against Portland.

What’s next for Columbus & Austin FC?

The Crew will take on the Revolution on Saturday night at 5 p.m. ET. Meanwhile, Austin has a Thursday, midweek, contest against the Portland Timbers, who are coming off a loss to Minnesota, at 9:30 p.m. ET.