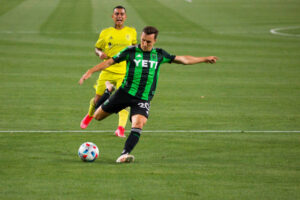 NASHVILLE, Tenn. – Austin FC have failed to take a point from any of their last three games, after taking 6 points from their first three. There have questions about the possibility of fatigue playing a part, with a grueling road schedule surely taking its toll. An increasing injury list doesn’t help, either. Today, though, Austin largely have only themselves to blame for leaving Nashville with nothing.

Much has been said and written about Nashville’s miserly defense. Austin knew going into this game that they were going to have to attack with pace and intensity. With the exception of a few moments during the second half, they didn’t. The first 45 minutes was a fairly drab affair, despite a large crowd – including a healthy traveling Verde contingent – providing an electric atmosphere. Austin had a couple of good looks at goal, the best created by Cecilio Dominguez, who tiptoed his way through the heart of Nashville’s defense only for his shot to go wayward. Nashville has a couple of early sights, too, mostly whenever Austin coughed up the ball.

Nashville applied pressure to Austin’s defenders. Not only should Austin be expecting the high press from most MLS opposition by now, they should be welcoming it. Josh Wolff’s possession model, when executed well, provides the opportunity to move the ball through the lines as space opens up ahead of the ball – assuming your defense can work the ball out. But in the first half, Austin’s defenders looked nervy, and they weren’t helped by an uncharacteristically tentative Alex Ring, reinstated following his one-game suspension, just ahead of them.

To compound Austin’s issues, Danny Hoesen, who had tended to drop from his number 9 spot back into midfield to assist with possession, also looked out of sorts. And it was Hoesen who lost possession in the 36th minute that led to a Nashville counter which Randall Leal finished with an unconvincing touch. Leal’s scuffed connection and subsequent bobbling-ball shot caught out an otherwise excellent Brad Stuver. A few minutes earlier, Austin had lost arguably their best defender this season Jhohan Romaña to injury. When it rains…

ATX came out a little more spirited in the second half and were able to notch an equalizer courtesy of substitute Jared Stroud – or at least they thought they had. Stroud gambled on a flick-on header from Pereira as he ran in behind the Nashville defense, but he was adjudged to have gone too early putting himself in an offside position. Pereira may have not even touched the ball as he was clattered in the back in the build-up. The goal was called back, and a free-kick given for the foul on Pereira, but nothing more than that.

Austin continued to pile on the pressure, but without any real pace or guile. Nashville’s incredibly resilient defense wasn’t inclined to buckle. If their offense had been as good, they might have extended their advantage via one of their numerous counterattacks. But a combination of hesitant finishing, last gasp Verde defending, and a determined Brad Stuver kept it to a one-goal game.

Josh Wolff showed his understandable frustration after the match, citing sloppiness in possession, particularly among some of his more experienced players, and the lack of cutting edge in front of goal. Austin registered 12 shots, but only 1 on target. They also dominated possession once again (59%), which will probably provide scant solace for Wolff.

Second half substitute Kekuta Manneh echoed his coach’s observations. “They always had 4, 5, or 6 players behind the ball and were very well organized. We knew what we wanted to do, but Nashville made it really difficult. There was just no space in behind to use our pace”. Austin will certainly need to improve on their attacking output if they intend on troubling MLS’s most in-form team and their next opponents, Seattle Sounders.

Plan B: Austin needs one. Without a number 9 currently that defenses fear, Austin have to find other routes to goal, more creative, less obvious routes.

Stuver is a MLS starting keeper: No question, no doubt – no idea how none of his former employers saw it? Austin have to be very grateful for that right now. When they are chasing the game, he is holding down the fort

Possession is credit, goals are cash: Austin’s possession-based game often looks good, never more than after the game when stats are compared. The only stat that truly matters isn’t being influenced by Verde’s possession right now, though. With only one goal scored in the past three games, Austin needs to start converting % to cold, hard goals.

Austin are still just 6-games into their first MLS season, so much slack should be given. That said, fans are left with the niggling feeling that more points could’ve quite easily been gained in at least two of their contests so far – including tonight’s. Still, patience has to be the watchword as Wolff and co continued to mold this team in its formative stages.