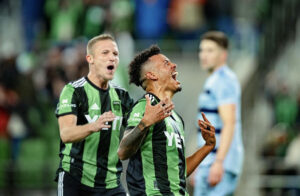 AUSTIN, TEXAS – Austin FC were anxious to see out their final home game of the season in style. The visitors to Q2 Stadium today, Sporting Kansas City, represented tough competition. SKC sat 2nd in the West, chasing down Seattle Sounders for the top spot. Remarkably, Austin overcame the odds to register an unlikely 3-1 victory against Sporting KC.

Austin FC beat Sporting KC on a night of first’s

Austin had their backs against the wall even before a ball was kicked. Their defense was struggling with Jhohan Romana out injured and Hector Jimenez suspended. Then, just minutes before kick-off, Nick Lima was withdrawn due to injury, causing Jon Gallagher to step in as an auxiliary right back. Alex Ring was already filling in as an auxiliary center back! Look closely, and I’m quite confident you could see the Scotch Tape holding together Austin’s backline.

Any nerves in the stands were soon settled when the home side scored after 30 seconds! Sebastian Driussi and Žan Kolmanič combine, the latter feeding Diego Fagundez out on the left. The Uruguayan clipped a ball to the back post where Jared Stroud, making a rare starting XI appearance, nodded the ball to Driussi who had found his way into the box unmarked and finished the move. Stroud, playing like he had something to prove, rattled the post minutes later after a mazy run down the right-wing. Austin looked good, SKC strangely bewildered.

When, on 22 minutes, Fagundez was chopped down out wide about 40 yards from goal, the free-kick looked suited to a left-foot whip from young Kolmanič. The Slovenian delivered. His bending effort zeroed on to the forehead of a stooping Julio Cascante who notched his second goal in Verde, and ATX’s second goal of the evening. Fagundez could’ve made it three right before the half when that man Stroud, again, picked him out at the back post with the goal at his mercy. His scuffed effort made it easy for SKC keeper Tim Melia. Despite Fagundez’s disappointment, the effort would’ve likely been called offside anyway.

SKC started the second half more brightly, but Austin were clearly in no mood to relinquish their advantage. Several ATX attacks resulted in last-gasp SKC blocks. Then, on 58 minutes, Jared Stroud finally got the goal that his efforts deserved. Fagundez fed him, and the former Colgate man calmly slotted past Melia to record his first strike in Verde.

That goal fired up SKC, who proceeded to pin Austin back for a concerted period. The Austin rearguard defended valiantly, Gallagher and Ring, in particular, distinguishing themselves in their unfamiliar roles. The dam finally cracked when Johnny Russell dispatched a superb snap-header. Cracked, but didn’t burst. Indeed, Fagundez could’ve added to Austin’s tally when a glorious sweeping move carried the ball across the ATX frontline and provided the winger with another clear sight on net – but it wasn’t to be as his shot sailed over.

In extra time, after a night of several first’s already, Austin registered another one when 16-year-old Owen Wolff, son of head coach Josh, made his MLS debut. The young man received a rapturous applause as he took to the field for the final few minutes and helped ATX see out a significant victory over quality opposition, sending the Verde fans home happy one final time in 2021.

Q2 Stadium turns out its Verde lights for the last time this year. This incredible new venue has provided some significant highs, and not just for Austin FC. The US Mens National Team and US Women’s National Team both played – and won – here. Liga MX royalty Tigres took to the turf here. And, impressively, the stadium was at capacity almost every single game.

Austin will bemoan the fact that they weren’t able to make their home the fortress they had hoped. Indeed, Josh Wolff said as much in the post-match press conference. But the coach also highlighted the incredible support of the Verde fans, again.

Family makes a home. And Austin family, resplendent in their Verde, with their non-stop singing, cheering, and chanting – and occasional beer showers – made 2021 a season to remember, even when some of the results were something to forget. Here’s to more of the same at Q2 in 2022 – with a few more Austin FC ‘W’s, please.

The post Austin FC beat Sporting KC on a night of first’s appeared first on Last Word On Soccer.