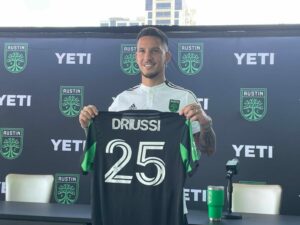 Austin FC have had an acute problem pretty much from day one of their inaugural season — scoring goals. A combination of injuries to key offensive players and perennial misfiring from those on the field have culminated in the joint lowest goals tally in all of MLS, 10, tied with Inter Miami. Today, Austin FC addressed that problem.

After months of speculation, the worst kept secret in Austin finally became a thing when Argentinian attacking midfielder/winger/forward Sebastián Driussi was unveiled as the club’s third Designated Player.

Driussi has been plying his trade most recently for Zenit St. Petersburg in the Russian Premier League, where he helped them secure the league title in 2018-19. For Zenit, Driussi has largely been deployed as a winger, registering 21 goals in 95 appearances. His assist ratio also looks encouraging as Austin FC seeks to bring in a player who will not only contribute goals himself but also unlock the scoring potential in others on the Verde roster.

Prior to Zenit, Driussi had an excellent albeit short stint in his home country of Argentina, where he played for the icon Club Atlético River Plate. He played the majority of his 67 games for ‘Los Millionarios’ as a center forward, notching an impressive goal every three games.

In addition to playing top-flight domestic soccer in Europe, the 25-year-old also has Champions League experience and international pedigree, having represented Argentina at the U17 and U20.

Driussi is a winner. With 14 trophies already in his short career to date, domestic and international honors, Austin FC are understandably excited to unleash their new attacking talent.

In today’s press conference, introduced to the press by General Manager Claudio Reyna, Driussi talked about creating history with Austin and being really excited by the project. He mentioned that he had a lot of offers from other teams, but his agent apparently did a good job of selling him the vision of Austin FC.

What can Driussi bring to Austin FC?

Regarding what he can specifically bring to the Verde front line, he expressed a preference for playing in behind the number 9, but said he can and will be happy to play anywhere across the front line.

Claudio Reyna emphasized that the club isn’t just looking for goals from the young man – they see him as a leader. Clearly, the expectation is that with the extensive experience Driussi has already accrued he can bring all of those smarts, all of that knowledge to the players around him, many of whom who haven’t played at this level before in MLS or elsewhere.

Can Driussi score the goals Austin needs to make their objectives of play-offs a reality? Can he help his teammates improve this offensive output? Austin FC fans will begin to find out when Austin’s newest acquisition takes to the field for the first time possibly as early as next week in one of the Texas derbies, versus Houston or Dallas.