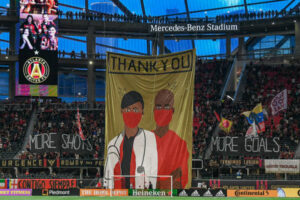 PREVIEW – Atlanta United manager Gabriel Heinze is hoping playing in front of a “beautiful” full Mercedes-Benz Stadium can inspire his side to victory against CF Montreal.

Atlanta United preview: Can a Full MBS Inspire A Win Over CF Montreal?

Despite an obvious improvement in performances, the Five Stripes have won just one of their four MLS games under Heinze so far. They also crashed out of the CONCACAF Champions League quarter-finals with a 4-1 aggregate defeat to the Philadelphia Union.

This weekend’s visitors head to Georgia top of the Eastern Conference with eight points from five matches, though they have played one game more than most. Even so, it’ll be a tough test for Atlanta United, but one they will face in front of a capacity crowd thanks to the latest relaxation of local COVID-19 restrictions.

Only the upper levels of the stadium will remain closed — as is often the case for regular-season Atlanta United matches — and Heinze will look to harness the famously raucous atmosphere generated by the 17s.

“I’ve heard the atmosphere is very good,” Heinze told reporters in a pre-match press conference. “It’s a beautiful stadium to play [in] and it’s even more beautiful with people inside. To be at home is great.”

Although a limited number of fans have been allowed back into the stadium, the Five Stripes haven’t played in front of a full home crowd since a 2-1 win over FC Cincinnati back in March 2020. Despite the long wait, winger Jake Mulraney remembers the atmosphere well and believes it’ll serve as a great “boost” to his teammates.

“It makes a massive difference,” Mulraney said. “It gives the whole team a massive boost having so many fans behind us. It’s a good feeling, as well. With the last however many games we’ve played not in front of many fans, only our last two games have had fans. It’s a nice feeling to have them back.”

Who else is looking forward to this?

When asked about the atmosphere at the Cincy game, Mulraney responded: “I remember it well, just the noise really. I’ve had a handful of games where you can’t really hear anything on the pitch and that was one of them.”

Asked whether or not the crowd will drown out Heinze’s famously meticulous instructions, Mulraney joked: “I’m sure we’ll definitely hear him.”