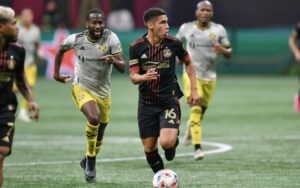 Editorial — Despite falling to a fifth defeat of the season, Atlanta United put in a much-improved performance during Saturday night’s 1-0 home loss to Columbus Crew.

It’s now been two games since the Five Stripes parted ways with Gabriel Heinze, with coach Rob Valentino managing the team on an interim basis during that time. And while, thus far, Atlanta have just one point to their name in games against FC Cincinnati and Columbus, there has been a distinct improvement in performance levels.

In both games, Atlanta dominated possession, shots and Expected Goals and, as stated by Valentino after the Columbus match, can count themselves unlucky to leave the double-header against the Ohio sides with just a single point.

But a raucous atmosphere reverberated around a  67,507-strong crowd at Mercedes-Benz Stadium on Saturday, with supporters sounding their pleasure at the improved nature of their side’s performance despite not finding the net. But it’s not just the 17s that are enjoying the increased emphasis on attack under Valentino.

“Definitely,” right-back Brooks Lennon responded when asked if the team is feeling better about the performances under Valentino.

He added: “I think Rob wants us to play very attacking-minded football. When we create a turnover, he wants the first pass to be going forward and try and create an attack. We are going to continue that mentality in each and every game going forward. You saw against Cincinnati in the end, we created tons of chances but were unfortunate to tie that game. It’s good to see us creating chances and guys looking to shoot on goal. I think the numbers speak for themselves.”

Though he wasn’t critical of Heinze’s methods, praising the Argentine for the effect he had on his career, center-back Anton Walkes believes the experience Valentino has gained during his three years at the club is allowing him to bring through Atlanta’s “philosophy” quicker.

“I just don’t think it was coming through as quick,” the Englishman told reporters. “I’m not going to critique Gabi for his tactics, because I learned a lot under him. I’m going to give him credit where it’s due.

“Rob has been here and seen what’s it like to work under other coaches. He knows the philosophy and blueprint that worked here. The relationships he has with players I think, like when I’ve gone through spells of not playing well, he’s been there for me. Same with most of these other guys. The young guys, he’s helped them turn from boys to men. You have to have respect for him. He knows what he’s doing. I’ve seen the amount of time he’s put in, I’ve honestly not seen anyone at the club put the amount of time he’s put in. He knows what he’s doing. I’m going to believe in him. He believes in us. He just wants us to go out and express ourselves. We have the capabilities to do it.”

From Darren Eales right down to individual players, the feeling is Atlanta United’s ultimate goal is about resorting the club’s “identity.” Having worked at the club since 2018, when the Five Stripes won MLS Cup, Valentino is better versed in that identity than most. This, according to Walkes, is what has helped them become so much more creative in such a short space of time.

“Tactics, what [Rob Valentino] expects of us, what he demands from us, how we feel we should play, how the club has played in the past, what the Club’s identity is,” Walkes responded when asked about the team’s recent creative streak.

“We need to get back to that since that is where the success came, and we are trying to follow in those footsteps again. We need to be more of a front-foot team. We need to be the ones who impose on the game and take it to people, especially here at home. I don’t know the exact number of fans that were in here, but I’m guessing close to seventy thousand, so with all our fans here, we need to make sure that we are going after teams and killing them off.”

Atlanta United’s search for a first MLS win since May 16th continues when they travel to Florida on Friday to face fierce rivals Orlando City.

The post Atlanta United improving under Valentino despite 1-0 home loss to Columbus Crew appeared first on Last Word On Soccer.