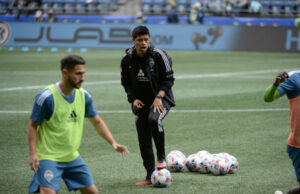 Atlanta United has their new man in charge. The Georgia club has hired former Seattle Sounders assistant coach Gonzalo Pineda to lead the Five Stripes through the rest of the season and beyond. Atlanta awarded Pineda with a contract through the 2024 season.

Pineda joins Atlanta United after a successful playing and coaching career. He began coaching in Seattle in 2017, where he finished his professional career. Pineda helped the Sounders win the 2019 MLS Cup title and was with them during the 2020 final against the Columbus Crew SC.

According to Atlanta United, interim head coach Rob Valentino will remain in charge for the club’s next two matches against LAFC this weekend and against Toronto FC on Wednesday. Pineda will keep Valentino on staff as an assistant and will retain goalkeeper coach Liam Curran. In addition, Pineda will bring Diego de la Torre to Atlanta, coming from Cafetaleros de Chiapas in Mexico.

Pineda will join Atlanta United next week, with his first training next Thursday, Aug. 19.

“This is truly the opportunity of a lifetime and I’m really excited to become Atlanta United’s head coach,” Pineda said. “I want to thank Arthur Blank, Steve Cannon, as well as Darren and Carlos for entrusting me in this position. I’m arriving to a club that already has a system in place to help the players and coaching staff deliver good results for the supporters. I’m looking forward to arriving in Atlanta and meeting with everyone at the club.”

A resume that speaks for itself

Pineda is brining plenty of success as an assistant in Seattle to the Five Stripes.

“Gonzalo has a great tactical mind and is someone I’ve always respected as a competitor with the Mexican National Team,” Vice President and Technical Director Carlos Bocanegra said. “During his time at Seattle, he’s shown tactical acumen, the ability to develop young talent and the understanding of what it takes to win in this league. He has a thorough knowledge of MLS and the league’s player pool, including our team. We’re confident he can make a smooth transition to our club.”

Seattle Sounders manager Brian Schmetzer thanked Pineda for his years’ of service, saying he knew this day would come. In addition, the Sounders are also losing assistant and former Sounder Djimi Traore is heading to Europe. His “topflight” club, according to the Sounders, will announce him soon.

“While this is a day I thought may happen, it is not easy to say goodbye to such accomplished players like Djimi and Gonzo, who transformed stellar playing careers into becoming two of the best young coaches in MLS. I could not be happier for the new opportunities in front of them,” Schmetzer said. “They have been essential pieces of our club’s success, both on and off the pitch. I have so much respect for their effort and dedication to help this club achieve success. I know they will be successful in the next chapter of their coaching careers.”

Pineda is a former Liga MX player, featuring for Pumas and Chivas de Guadalajara. He featured 45 times for the Mexican National Team and was on the team’s 2006 World Cup roster. As a player with Seattle, he won the U.S. Open Cup in 2014 and the Supporters’ Shield in the same year.

Our leader is here to pave the way.