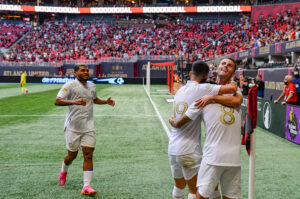 Yesterday, Atlanta United FC blanks Toronto FC as they win the game 1-0 at Mercedes-Benz Stadium. It was a good game for both teams. Both teams had several chances to score but failed to capitalize on their opportunities. Atlanta though converted on one of those chances, and it was the difference of the game against Toronto.

Full Game Summary:#TFCLive did not take advantage of their opportunities.#UniteandConquer blocked a lot of Toronto FC shots.

Toronto FC did not capitalize on their opportunities

TFC did not have as many chances as Atlanta, but they still had scoring opportunities. Their first shot on target was Jonathan Osorio in the 16-minute. It was a nice play, but the shot was easy to save for Atlanta goalkeeper Brad Guzan. They had three more chances to score in the first half, but only one of those shots was on-target.

Their best chance might have come in the 58-minute. Patrick Mullins got a terrific header off, but the shot was just wide. Alejandro Pozuelo also had two chances to tie the game in the 60 and the 71-minute.

It is important to note that Atlanta blocked a lot of Toronto shots. They blocked seven TFC shots in Atlanta on Wednesday. This dramatically reduced the number of chances Toronto had to score. A lot of these blocked shots happened late in the game. The ones that stood out were

Atlanta blocked seven of Toronto’s 14 shots. This is half of the shots Toronto took. They really knew how to defend and it played a role in Atlanta getting the clean sheet win on Wednesday.

Atlanta had 24 shots but only had three shots on target. There will not be too much on why they did not convert on their chances as they ended up winning the game.

20’ #UniteandConquer scores! Ezequiel Barco’s shot takes a deflection and ends up in the back of the net!#ATLvTOR | 1-0 | #MLS pic.twitter.com/j9VaG02Qzc

Their goal came in the 20-minute. It started off when Ezequiel Barco received the ball from a terrific through ball from Brooks Lennon. Barco was then defended by Eriq Zavaleta. Zavaleta should have been tighter defending Barco. This allowed Barco to get a shot off, which deflected off Zavaleta’s foot and went into the back of the net.

It is important to note that Atlanta had many chances to score. One was Marcelino Moreno in the 83-minute, who should have scored. Another chance was in the 53-minute where Josef Martinez’s shot was off-target. However, despite these missed opportunities, Atlanta found a way to win, largely thanks to their terrific defence.

Tonight is the 16th consecutive match without a clean sheet for @TorontoFC in @MLS play (and in all competitions). There are 3 other comparable stretches 1/? #TFCLive @WakingtheRed @vocalminorityCA @JohnMolinaro @joshuakloke @24thminute @LukeWileman pic.twitter.com/2X68xKbavu

It is important to note that Toronto FC also played well and played good defence. The unfortunate thing was that Jozy Altidore and Ralph Priso’s injuries are more serious than everyone thought initially. So, that will hurt them as they do not have a striker to score goals. It is also important to note that Atlanta goalkeeper Brad Guzan got a clean sheet against Toronto.

This is also the 16 straight games that TFC has failed to register a shutout or a clean sheet. This is the longest streak in TFC history. Also, like many games before, they gave up the first goal of the game. Yes, Zavaleta got unlucky with the shot deflecting off his foot. Still, he could have played tighter defence to prevent the goal from being scored.

Toronto is now in a difficult position. They only have 15 points so far this season. DC United and CF Montreal right now possess the last two spots in the Eastern Conference. Both teams have 27 points, which is 12 more than what Toronto currently has. Conversely, for Atlanta, these three points were critical for them trying to get an MLS playoff spot.

They are only three points behind Montreal and Washington D.C. for the final two MLS playoff spots. Other teams that might worry Atlanta are Columbus Crew SC and the New York Red Bulls. The Crew are tied with Atlanta in points, but Columbus has the tiebreaker as they have won more games than Atlanta. There is also the Red Bulls. They are two points behind both Atlanta and Columbus but have played one less game.

Games coming up for both teams

Both Atlanta and Toronto teams will play on Saturday, August. 21 at 8:00 p.m. ET. Atlanta United will travel to Audi Field to take on Washington D.C. This is an important game as a win would tie Atlanta with Washington D.C. in points. They will rely on Barco as he has been playing very well recently for Atlanta. It is important to note that D.C. United currently owns the tiebreaker for wins with Montreal and that is also the case if Atlanta wins on Saturday. MLS fans can watch the game on MLS LIVE on DAZN, NBCSWA, TeleXitos, and Bally Sports South.

Lastly, Toronto will play against Inter Miami CF. Like Toronto, Miami has been struggling a lot this year. The game will take place at DRV PNK Stadium. The game will be televised nationally in Canada on TSN4. It will also be shown on My33, CW34, and UniMás.