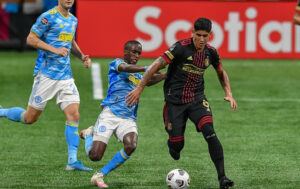 PREVIEW – Atlanta United will travel to face the Philadelphia Union, looking to overturn a 3-0 first-leg deficit in their CONCACAF Champions League quarter-final clash on Tuesday night. Let’s see what needs to change to keep the Atlanta United CCL dream alive.

Despite putting in a mesmeric attacking performance in the first half, forcing Andre Blake into no fewer than five saves, the Five Stripes were picked off on the break in the second half, with the Union taking a healthy advantage home thanks to a Kacper Przybylko brace and another strike from substitute Anthony Fontana.

History is not on Atlanta’s side as they seek to book their place in the semi-finals. In the Champions League era, which started in 2008-09, only Club America have overturned a 3-0 first-leg loss to advance to the next round, beating Herediano 6-0 in the second leg of their 2014-15 semi-final.

Of course, Club America had the added advantage of hosting the return leg of that clash on home soil. The Five Stripes have to travel and have won just one of their five away games in CCL play to date, beating Alajuelense 1-0 in the first leg of this season’s Round of 16.

Despite the record books being against them, Gabriel Heinze will not be throwing in the towel and will expect nothing less than maximum effort from his players as they seek to pull off this remarkable comeback.

Here are three things that must happen if Atlanta United are to achieve the seemingly impossible.

Put simply, Atlanta United wouldn’t be in this position if they’d taken their chances. As mentioned, in the first half alone the Five Stripes forced Union goalkeeper Blake into five saves, while the Jamaica international extended that total to seven by the end of what was a remarkable performance.

But for all of Blake’s goalkeeping heroics, Marcelino Moreno ended the match with an Expected Goals (xG) count of 0.72, while Josef Martinez sat at 0.61 and Jurgen Damm 0.39. Each squandered great openings that should have been put away by players of their caliber.

While they didn’t quite cut them open as they did the Union, Atlanta had similar issues in a 2-1 defeat to the New England Revolution at the weekend, with Jake Mulraney putting a free header wide of the post, Damm and Ezequiel Barco wasting a number of counter-attacking opportunities with poor decision-making and their goal only coming via a Moreno penalty.

This team is already far more exciting to watch than the 2019 and 2020 iterations under Frank de Boer and interim boss Stephen Glass. However, if it is to be a successful team, they must start making the most of these deciding moments.

Though goals two and three were scored on the break as Atlanta pushed forward, it’s the Union’s opening goal last week that will have given Heinze the most nightmares. Jakob Glesnes was allowed to run free at the near post to flick on Jamiro Monteiro’s corner, with the ball bypassing no fewer than four Atlanta players at the near post, while those defending behind were caught flat-footed as Przybylko reacted first to fire home.

Again, this is a repetitive pattern. Against the Revolution, Atlanta simply couldn’t deal with the deliveries of Carles Gil and it was the Spaniard who provided the assist for the opening goal after breezing past Damm. Franco Ibarra switched off at the far post, allowing Brandon Bye to get the jump.

Something Heinze is going to have to work v.hard on is defending crosses. They totally lose their shape when balls come into the box due to switching off/panicking

More has to be done to actually stop crosses too. Damm must do better for the 1st #NERevs goal (3rd clip) #ATLUTD pic.twitter.com/8XmTCmCxgz

Miles Robinson and Anton Walkes have formed a fantastic partnership at the heart of Heinze’s defense, while Designated Player signing Alan Franco has all the tools to become a truly elite MLS center-back. But this is a serious weak spot in the Five Stripes’ armor. One that the Union have already exploited to the fullest once recently. Can Heinze’s defenders learn their lessons?

Atlanta United fans won’t need telling just how good Santiago Sosa has been so far since joining from River Plate. The Argentina youth international has wowed 17s with his pinpoint diagonal passes and ability to take the ball under pressure.

At the weekend, Bruce Arena and his New England side seemed to do a great job in limiting Sosa’s ability to progress the ball forward, often cutting out passing lanes and stopping the 22-year-old turning in possession. The result was an endless stream of backwards passes from Sosa and given he is by far the best progressive passer in Heinze’s side, this was a real problem.

The strange thing is, Heinze seemed to preempt this happening against the Union in the first leg last week and made adjustments to cope.

With Curtin setting up in a diamond formation, Pryzybylko, Monteiro and Cory Burke formed a triangle in the exact spot where Sosa would usually receive possession in his holding midfield role. To counter this, Heinze moved his compatriot into the middle of a back three, with his center-backs pushing out to create time and space for Sosa in possession. From there, the midfielder could carry the ball forward, distribute to the wings, or play line-breaking passes into the likes of Barco and Emerson Hyndman further forward.

Btw, the Union’s shape here is exactly why Heinze put Sosa into the back 3. So he could pick up the ball in space

If he’d operated in front of the defence, he’d be in that circle & primed to be pressed

Interesting to see how Heinze & Curtin play that out in the 2nd leg. #ATLUTD pic.twitter.com/jSPpP4THcw

Whenever Sosa has been off the leash and allowed to dictate, Atlanta United have been a joy to watch this season. Curtin is an intelligent coach and will likely have taken notes from the Revolution this weekend. It’s now time for Heinze to prove his own tactical acumen to get Sosa in space, where he can be the driving force behind a remarkable Atlanta United comeback. Even if they can’t find all three goals, they can make a statement on Tuesday night.