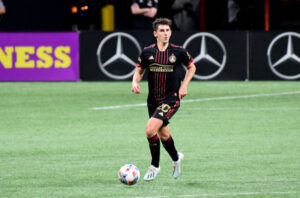 EDITORAL – Atlanta United are working hard to find their ‘killer instinct’, according to midfielder Emerson Hyndman.

The Five Stripes have shown signs of promise during the early stages of Gabriel Heinze’s reign so far. For example, Atlanta top the whole of MLS when it comes to passing accuracy (87.01%), while they’ve only lost one of their five league matches so far.

But Heinze’s side have struggled to convert stylish possession into chances in the final third, scoring just six goals and hitting the sixth-lowest number of shots on target (20) throughout the league.

Given the way Atlanta struggled in 2020 — a year which saw them sack manager Frank de Boer, lose Josef Martinez to injury and finish 12th in the Eastern Conference — it’s hardly surprising that they’ve suffered a tough transition to Heinze’s methods.

But Hyndman insists the players and the coaching staff are working tirelessly to give Atlanta more bite in the final third and they’re close to finding the right balance.

“There are times where you’ve got to be patient, but there is also that killer instinct that we’re still trying to find a little bit as a team,” Hyndman told reporters on Wednesday. “We get around the box enough. Sometimes, we’re a little too patient, other times we’re too fast, so you’ve just got to find the balance and it’ll work itself out.

“We’ve done a lot of work on the training field of when the right time is, we’re working on our runs and things like that. That’ll all come. We’re still in the beginning stages of what we’re trying to do. It’s a very complex way of playing, so we’re trying to get everything up to speed quickly. We’ve done numerous things pretty well, but that’s the last stage for us, the final third. Getting that to where we all feel comfortable so we get more chances on goal.”

Although sections of the Atlanta fanbase have shown concern at their side’s lack of cutting edge, Hyndman is more relaxed. The United States international is pleased with the team’s adjustment so far and says Heinze has always insisted that adjusting to his style of play wouldn’t happen overnight.

“Gabriel has always preached to us that it’s going to take time to become fully aware of exactly everything we’re doing all at the same time,” said Hyndman. “Obviously, some people learn differently from others and you’ve got to take that into account.

“I think at this stage of the season, to take on everything we’ve taken on and to put in some of the performances, considering the complexity of some of the things we’re being asked to do, we’ve done really well and it can only get better. [Gabriel] has been pleased with what we’ve done so far but at the same time, we’re working every single day to get better. And he sees the challenges that lie ahead and where we can get better. Especially in the final third, we’re working together to make it click.

“I think it’s hard to put a specific timeline to anything, but if we go game to game and week by week to try and improve, that’ll only make us better and the way we’re working, I think we will.”

After scoring a 94th-minute goal to seal a dramatic 1-0 win over CF Montreal in front of over 40,000 fans at the weekend, Atlanta travel to Seattle on Sunday to face a Sounders side unbeaten after six games.

While the Five Stripes will be firm underdogs, that clash will offer Heinze another chance to test his new squad against top-class MLS opposition. Hyndman is aware of the tough challenge ahead, but insists he and his teammates aren’t there to admire Seattle and that they’ll try to play ‘on the ‘front foot’.

“They’re obviously a close-knit group, a tough team to play against. Especially in Seattle,” he said of Brian Schmetzer’s side. “We know we have a tough task ahead of us but at the same time, we want to go there and try to play on the front foot again. Obviously, we know it’s a difficult game, they’re in a good run of form and are a confident team, so we have to be aware of that, for sure.

There is no better barometer for progress in MLS right now than facing the Sounders.