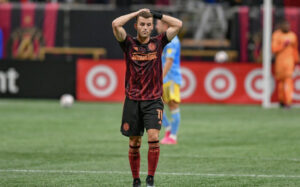 Atlanta, Ga. — For the second game in a row, Atlanta United gave up a two-goal lead to draw 2-2.

After taking a 2-0 lead thanks to a Kacper Przybylko own-goal and an Anton Walkes header, the Five Stripes seemed to have things wrapped up. But the Philadelphia Union hit back with Cory Burke firing home a rebounded long-range effort before Jakob Glesnes unleashed an absolute thunderbolt from 30 yards out.

Here are three things we learned about the Five Stripes from the match.

It’s often said that two-goal leads are the most dangerous, with teams habitually switching off, losing concentration and inviting the opposition onto them.

Just tell that to Atlanta United who, just weeks after throwing away a 2-0 lead to draw 2-2 with Nashville prior to the international break, conspired to do the exact same thing again here.

Earlier in the week, Brooks Lennon told reporters of the double training sessions Heinze had been putting his side through recently in a bid to cut out those mistakes caused by fatigue.

And the craziest thing is, the nature of the two goals suggests that effort is paying off. Philadelphia’s first goal was the result of Brad Guzan being unable to deal with a deflected effort from range, spilling the ball into the path of Burke. And, well, you could have put two goalkeepers in for Glesnes’ effort and they would be unable to keep it out. Though the closing down left a lot to be desired.

I know I’m being ultra critical here, but I can’t believe Conway is the only one who even tries to get close here.

Glesnes has done this before! #ATLUTD

Harsh but if Moreno gets across, he puts Glesnes off. pic.twitter.com/SvXxwMx8UN

Rather than a fitness issue, this collapse felt more like bad luck with Atlanta’s energy levels not visibly dropping throughout. But the work — and head-scratching — continues for Heinze as a result.

Since the start of this season, one player from Atlanta United’s existing roster has risen to promise arguably more than anyone else: Brooks Lennon. The 23-year-old was in and out of the side last year under Frank de Boer and Stephen Glass. But under Heinze, he has not only become the starting right-back, but also Atlanta’s chief creative outlet.

It was Lennon’s crossing that provided the assists for both Atlanta goals, but they were just two of six chances he created across the 90 minutes. Lennon’s crossing is laser-precise and about as good as we’ve seen at Atlanta since the days of Julian Gressel whipping the ball in for Josef Martinez.

If y’all want to know how important Lennon’s chance creation is to #ATLUTD, take a look at their shot map from the 1st half. Majority coming from the far post on the left

His delivery from the right is great. Lennon *should* get a lot of assists this season if ATL can finish pic.twitter.com/H4LIln8DFF

But it wasn’t all crosses from Lennon. The former Real Salt Lake man played a complex tactical role, often drifting inside to keep tabs on Jamiro Montero. Lennon helped the Five Stripes defensively with two tackles and three clearances, while greatly restricted the space in which Monteiro could operate.

An early contender for Atlanta United’s player of the season, for sure.

Just as it was throughout 2020, the absence of Josef Martinez was a huge question mark for Atlanta heading into this one. How would they cope without the striker while away on international duty with Venezuela?

On Sunday, Heinze decided to field Erick ‘Cubo’ Torres up-front. The Mexican re-signed for the Five Stripes after initially leaving at the end of last season, with a view to building his coaching career for the years to come.

Cubo is never going to be the man to find goals for Atlanta but against the Union, he played a functional role to lead the line and bring his opponents into the game. The 28-year-old posed the Philadelphia center-backs physical problems all night, battling for the ball and holding it up to allow his midfield to get forward, while also winning four aerial duels. Sure, he could have scored with a couple of headed chances but goalscoring prowess has never been Cubo’s strong point.

There are a lot of quite valid calls for Heinze to give youngster Jackson Conway more chances in the first-team but for now, these are the sorts of performances Atlanta need from their deputy No.9. Solid, hard-working and smart in possession.