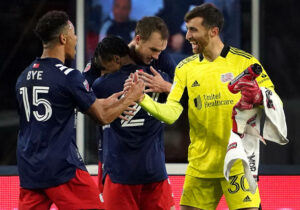 New England Revolution prevailed against the Rapids last night and there is more to the win than just the three points. Tajon Buchanan scored the only goal of the game to secure history for the Revolution. Prior to this season, a Supporters’ Shield had never made its way back to Massachusetts. That is no longer the case though as Bruce Arena has guided his team to a record-breaking regular season. So… Are the New England Revolution the greatest team in MLS history?

Alexa, play (simply) The Best by Tina Turner! Last week, it was confirmed that the Revolution had clinched the Supporters’ Shield with time to spare. Now, after the aforementioned 1-0 victory against Colorado, they have broken LAFC’s regular season record with one game to spare. The record was held by Galaxy from their 1998 season with 68 points, but is staggering how often this has been beaten in recent campaigns.

Toronto FC hit 69 in 2017 with Greg Vanney at the helm, a total matched by Atlanta United the following season in what was only their second in the league. Chris Armas led the Red Bulls to seventy-one points in the same year as the Five Stripes though. Most recently, it was that exceptional LAFC side under Bob Bradley, spearheaded by Diego Rossi and Carlos Vela, who broke the record (with 72). What is staggering about all of this is that three of those four are set to miss out on the playoffs this term. Atlanta being the only side above the playoff line currently.

Focussing on the team at hand though, the stars of the hour, the New England Revolution. They boast one of the best managers in the league in Bruce Arena who has been there and done it all. This may be the Revs’ first taste of Shield success but Bruce on the other hand, already had three to his name. One came with DC in the late 90s as well two with the Galaxy in 2010 and 11. Not to mention that he won two and three MLS Cups respectively with those two. Only seven teams have done the domestic double, two of which were managed by Bruce.

Bruce is deservedly lauded with praise but the Revolution players on the pitch have been nothing short of sensational too. Tajon played himself into a move to Europe. Carles Gil is being heavily talked about as the MVP despite missing numerous games through injury. Both of the other DPs, Adam Buksa and Gustavo Bou, have enjoyed elite spells in front of goal.

You can’t stop him, you can only seek to contain him.

Congrats to Adam Buksa on being voted @MLS Player of the Week!#NERevs pic.twitter.com/uSKG5tp4So

Matt Turner has been the best goalkeeper in MLS. Andrew Farrell was constantly class and broke his own records in the process. A lot of young players have emerged; Brandon Bye and DeJuan Jones most notably. The likes of Henry Kessler, Matt Polster and Tommy McNamara have been very underrated. It was a squad effort on and off of the field.

Collating seventy-three points with one game left inevitably means that there were some hugely impressive results along the way. The Revolution edged out the Union even in the absence of Gil, Matt Turner’s heroics helped them past NYCFC in a five-goal thrillerplus they put five past Inter Miami.

The question remains though, can they do the double? Can the Revolution go on and win MLS Cup too. Their final regular season game sees them meet Inter Miami but very little rides on it from Bruce’s point of view. New England will of course get a home run in the playoffs and an MLS Cup final match at Gillette Stadium would be something to savour.

In a year where a beloved Revs man Paul Mariner passed away, the broken records honour his memory well. There is certainly an argument to be had for New England being the greatest side in MLS history!

The post Are the New England Revolution the greatest team in MLS history? appeared first on Last Word On Soccer.