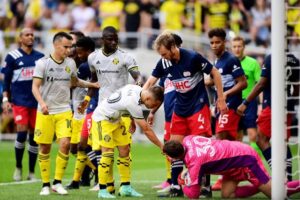 FOXBOROUGH, MASS- are the Crew going to miss out on the playoffs? A trip to the Shield leading Revs is a great chance for the Crew to remind everyone what they’re about but it could easily go the other way. New England are starting to get closer and closer to full strength as they prepare for the run-in with a record-breaking regular season in their sights. Who will prevail at Gillette Stadium?

The Crew edged out New England 1-0 in last season’s run to MLS Cup glory but they are yet to repeat this feat. It was the same score line but in the Revs’ favor when the pair met back in May, a late Adam Buksa strike the difference in Massachusetts. The Pole’s strike-partner Gustavo Bou was then on target in one of the first games at Lower.Com Field, as was Tajon Buchanan. They put the Revs ahead early but Gyasi Zardes made it 2-1 and then Andrew Farrell scored at the wrong end to make it honours even. Caleb Porter will certainly be hoping that his side will fare better this time around.

Gotta tell ya, it feels like the Crew season is done. One of the worst follow-up seasons for an MLS Cup winner I can ever recall.

That is easier said than done though and when you consider New England’s form, the Crew will certainly be up against it. Since that 2-2 draw, the Revs have only lost twice and they were the subsequent game in which Toronto were buoyed by a new manager bounce and a narrow loss at the hands of NYCFC. Ten of the twelve games since then have gone the way of Bruce Arena’s men with the only dropped points coming in a goalless draw with Gary Smith’s very impressive Nashville SC side as well as the aforementioned NYCFC defeat. The most notable victories in this imperious run include a dramatic 3-2 against a DC United side reinvigorated by the arrival of Hernan Losada, revenge over NYCFC last time out and a couple of wins over the Shield holders Philly.

ICYMI: Our 10th home dub of the season

The Crew on the other hand are in a much less enviable position. To give a fair range of comparison, since that score draw with the Revs a few months back, Columbus rather meekly boast a record of four wins, two draws and eight defeats. Four of those six positives results came right at the beginning of this stretch though, this being followed by six straight losses. When it was at its worse, they shipped four to both NYCFC and DC as well as three to Atlanta. Last time out, the bounced back from a shameful loss to Inter Miami with a home win over the Red Bulls, Darlington Nagbe and Miguel Berry finding the back of the net to overturn Patryk Klimala’s early strike. All in all, a side who many fancied to make history and retain MLS in the Crew are in fact operating below average.

In terms of team news and in fairness to Caleb Porter, the Crew have had a number of injuries to contend with. Pretty much everyone of their key players has spent time, at some point, in the medical room. Gyasi Zardes is back in action though and started in the win over the Red Bulls, although that game did see Pedro Santos exit after just six minutes with Abdul-Salaam replacing him. Aidan Morris, Perry Kitchen, Artur and Kevin Molino are all injured and have been for a while so the continued excellence of Darlington Nagbe, the man to win MLS Cup with Portland, Atlanta and the Crew, is a welcome sight for Porter. On the other hand, Tajon Buchanan’s move to Club Brugge is all sorted now so he can knuckle down to focus on seeing out this season plus Carles Gil has been back in action for a couple of weeks too. The general consensus is that Bruce is blessed with a clean bill of health.

The Crew have it all to do then if they wish to even have a shot at defending their MLS Cup crown. Atlanta United and Inter Miami have seen upturns in form recently and that has seen the pair join the growing list of teams above Columbus in the Eastern Conference. Porter’s men are currently tenth with Gonzalo Pineda’s ATL occupying the final playoff spot and whilst there are just a few points in, the Crew are trending in the wrong direction. Can they make a statement with a win on the road against New England?

The post Are the Crew going to miss out on the playoffs? New England vs Columbus preview! appeared first on Last Word On Soccer.