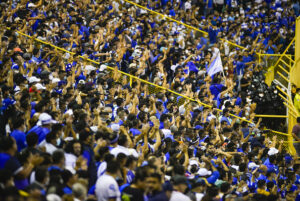 PREVIEW – World Cup Qualifying continues Sunday night with CONCACAF’s most heated rivalry: El Salvador versus Honduras. The Estadio Cuscatlan will once again be a sea of blue and white after the raucous home support was on display against USMNT Thursday night. La Selecta and Los Catrachos haven’t squared off at this stage of World Cup Qualifying since the 2009 hexagonal. It was then where Honduras won home and away against El Salvador, two one-nil victories with both goals by Carlos Pavon.

A lot has changed since that time, but the animosity remains. The second of sixteen total matches in this already intense CONCACAF World Cup Qualifying cycle. Let’s take a deeper look at Sunday’s night game.

Both Teams Start WCQ with a Draw

El Salvador and Honduras come into this game with a point to their name. Honduras started their campaign with a 1-1 draw at BMO Field in Canada. Their defensive fortitude was tested on multiple occasions, blocking numerous shots to preserve the point. The result did come at a cost, with Alexander Lopez scoring his penalty and then injuring himself in the process. His fitness is important in the middle of the park, but substitute Romell Quioto is an adequate replacement.

Manager Fabián Coito will be pleased to see his side pick themselves in the manner which they did after conceding a penalty which Cyle Larin converted. Defender Andy Najar was superb against the Canadians, creating chances and interceptions as he was all-action at both ends of the pitch. The Uruguayan is looking to take Honduras back to a fourth World Cup, their first since 2014 in Brazil. Los Catrachos first reached the competition back in 1982 in Spain.

On the other hand, El Salvador showed itself well in the scoreless draw at home against the United States. While much of the conversations after were about the USMNT performance, credit goes to La Selecta for nullifying them. Hugo Pérez has his team drilled into a 4-3-3 system that can cause problems in transition. They provided moments of scare to Matt Turner and the USMNT backline, so El Salvador will be confident of doing the same against Honduras.

One big positive that came out of the El Salvador performance was the showing of Darwin Ceren. The midfielder left the Houston Dynamo match preceding Thursday’s match with knee trouble. To see him play around 60 minutes before being subbed off is a big boost, and should signal another start this weekend.

Forget USA-Mexico, El Salvador-Honduras is the most heated and storied rivalry in CONCACAF. Just 326 kilometers (202.5 miles) separate the two neighboring countries. There have been many big games, but one clash decades ago took this to levels unforeseen. It was the qualification cycle for the 1970 World Cup in Mexico, El Salvador and Honduras pitted against each other.

As chronicled by the BBC – Honduras won the first leg in Tegucigalpa 1-0. El Salvador won the second leg by a 3-0 scoreline, however, both games saw violent scenes. The third and final contest in Mexico City was won by El Salvador, 3-2. What ensued would be infamously known as “The Football War” – diplomatic relations between the two countries ended, and war occurred. Thousands of Salvadorans emigrated to Honduras to take advantage of work opportunities, only to then be sent back by the Honduran government.

It’s a gruesome and ugly chapter that also involved soccer. Thankfully, relations between the countries have improved dramatically and the sporting rivalry has remained peaceful without any barbarity. Moreover, the two teams are itching to play one another, and El Salvador is looking for revenge.

You see, the last meeting between the two nations was in the 2019 Gold Cup. With a spot in the knockout stages on the line, Honduras bagged four second-half goals and routed El Salvador 4-0 at Banc of California Stadium. As mentioned before, much has changed for both teams and that’ll be on full display Sunday night.

What to Expect in El Salvador-Honduras

The latest chapter in this great rivalry should provide good entertainment. To the point, there hasn’t been a scoreless draw between the sides since they play a friendly back in June 2012. Let’s hope the game this weekend didn’t just get jinxed.

Tactically, the 4-5-1 of Honduras can provide issues on the flanks. The combination of Najar and Edwin Rodriguez will be dangerous, look for them to be closely marked by La Selecta. The half-spaces for El Salvador is a place where they can find some success. The 4-3-3 midfield trio of Alex Roldan, Derwin Ceren and Marvin Monterrosa were tremendous against the USMNT. Their work rates and tackling proved crucial in limiting the Americans, however, they’ll need to be better at crossing to keep a constant threat.

Substitutes for both teams will have a say in this as well. Therefore, in a game that doesn’t have household names on both sides, the success of either team falls on the tactics of both managers. In a game like this, more than three points are at stake.