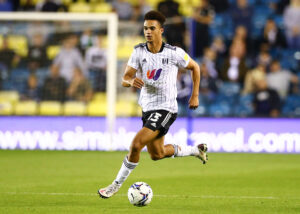 Antonee Robinson has been flying for Marco Silva’s Fulham squad in the early stages of the new season and the American defender celebrated his first goal for the club in Tuesday’s Carabao Cup victory.

Antonee Robinson and his production with Fulham

Robinson didn’t start for the English Football League Championship side but did come off the bench to score the second goal in Fulham’s 2-0 road win over Birmingham City. It was Robinson’s second-ever club goal and his first since November 2019, when he scored for Wigan Athletic against Millwall.

Jay Stansfield scored the first goal for Fulham in the opening half at St. Andrew’s and was replaced by Robinson in the 85-minute. The U.S. men’s national team left-back made no mistake by sliding a left-footed shot into the bottom-right corner, giving Fulham an insurance goal prior to stoppage time.

Robinson has started off strong for Fulham this season, helping them to a 4-1-0 record across all competitions. The left-back registered his first assist for the club in last weekend’s 2-0 win over Hull City and now has followed that up with his first goal.

Fellow American defender Tim Ream did not dress for Fulham after leaving Saturday’s match in the 21st minute due to injury. Ream however seems to be in good spirits ahead of a possible inclusion to Gregg Berhalter’s roster for September’s World Cup Qualifiers.

Robinson will also be in the mix for a USMNT call-up this fall after impressing in his first five appearances for the London-based club. Up next for Fulham is a league match vs. Stoke City before two weeks off due to FIFA’s international schedule.

The 24-year-old has made 12 appearances to date with the USMNT and remains in the discussion to start in qualifying. Sergiño Dest, a right-back by trade, has also appeared as a left-back under Berhalter and Sam Vines is coming off a solid tournament in the Concacaf Gold Cup.

Robinson’s strong run of form though could see him get the nod against El Salvador on September 2.