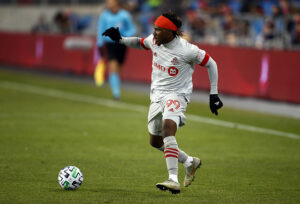 Toronto FC  will play two home games at BMO Field according to MLS Soccer. The first home game this year in Canada for TFC will happen this Saturday against Orlando City SC.

The wait is over….

WE’RE BACK AT BMO, TORONTO!#TFCLive

Analysis of Toronto FC Playing in Toronto and Potential Problems

What we are going through is very difficult, living in the hotel, far from our families and the results that don’t come. Please TFC fans we need your support even more than yesterday. #TFCLive #AllForOne @TorontoFC

Toronto FC playing at BMO Field will help the team perform better in the 2021 MLS season. Fans and families mean a lot to TFC’s players, coaches, and staff. Not playing in a team’s home market has also affected a team’s performance. This can be seen with the 2020-21 Toronto Raptors and most recently this year with the Toronto Arrows. Both the Arrows and the Raptors failed to make the playoffs this year. What this shows is that not playing in one’s home markets has taken a toll on these player’s mental health and performance. TFC defender Chris Mavinga talked briefly about the difficulties Toronto players have been experiencing this year.

#TFCLive Prez Bill Manning confirmed that two TFC players, who are not fully vaccinated, are not training with the club: “They’re at home. The rules are the rules. So they’re abiding by the rules and once they’ve served the quarantine, they’ll be back joining the team.”

It is important to note though that two players from TFC are currently not fully vaccinated. According to Jeff Carlisle, soccer columnist for ESPN, players who are unvaccinated cannot play in cross-border matches at this time. It is unknown who these two players for TFC currently are. Of course, the same rule applies to American MLS teams travelling to Canada.

There will be 7,000 fans at BMO Field on Saturday against Orlando City SC according to Steve Buffery of the Windsor Star. This includes frontline healthcare workers, first responders, and season seat members at the stadium. There have been two confirmed matches that will be hosted at BMO Field this month. The first game will be against Orlando at 7:30 p.m. ET. The second game will be against the New York Red Bulls on July 21 at 7:30 p.m. ET. Canadians can watch both games, which will be shown nationally on TSN. Both games can also be watched on ESPN+.