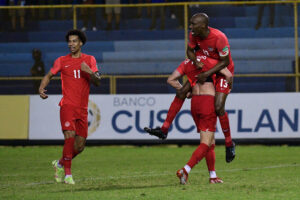 ANALYSIS – On the verge of a historic birth in Qatar, the Canadian national team capitalized on El Salvador (Canada El Salvador) to complete a perfect window. Their 2-0 win wasn’t enough however to seal a spot this window, due to results elsewhere in CONCACAF. After the game was nearly called off just hours before due to protests by the El Salvadorian players, the game managed to go ahead as scheduled. A fluke goal from Atiba Hutchinson and a 94-minute dagger from Jonathan David secured the victory for the visiting Canadians.

Following a historic 2-0 win over the US on Sunday, the chances were high for Canada to underwhelm and look exhausted by the travel. But before a ball was even kicked in El Salvador, the game was looking in jeopardy. Reports came out from captain Alex Roldan claiming that his side would refuse to continue playing until his side were paid it’s earned bonuses from the federation. After a very confusing 45 minutes or so, a press conference was called to announce that the game would go ahead as scheduled, with players playing “for national pride”.

Both sides went through more than a handful of changes from their previous matches, most notably three out of four defenders for Canada. Doneil Henry and Scott Kennedy were the two towering centre backs, having played just 80 minutes combined so far this window. The return of Stephen Eustáquio from Covid and a rested Atiba Hutchinson paired with Jonathon Osorio to form a midfield trio. Liam Millar made his first start in five games, completing a front three of Jonathan David and Junior Hoilett.

As for the hosts, El Salvador also was forced to make seven changes to the side that travelled to and beat Honduras on Sunday. Hugo Perez selected a 3-5-2 and was required to make one alteration prior to kick-off. Supposed starting keeper Mario Martinez suffered an injury, forcing Kevin Carabantes to jump into action for the first time in World Cup qualifying. Only Eriq Zavaleta, Ronald Gomez, Narciso Orenella and Nelson Bonilla started both Wednesday as well as Sunday’s 2-0 win over Honduras.

The key to Canada’s game is undoubtedly their speed on the flanks and using that explosive acceleration whenever they deem fit. However that was proving extremely difficult with Honduras committing 11 fouls in the first half, 17 in total. The addition of the more physical than technical Liam Millar sent a message down the left side of the highly-endured Sam Adekgube behind him. The right side was more of what John Herdman hopes to see every game in terms of style. The speedy and athletic Richie Laryea sat behind the intricate and quick dribbling of Junior Hoilett.

With Eustaquio not quite matching the physicality brought by the El Salvadorian side, especially sitting 10 players back with their lone striker, it was Hutchinson who had to carry the front of the box to box work. Granted, in the end Canada also ended up giving away 17 fouls. Majority of those fall in the final 20 or so minutes. It was always going to be a difficult environment to play in. The fans. The humidity. The travel. The physicality of the El Salvadoran midfielders made life that much tougher for Canada. At least until John Herdman decided for a change of pace.

If at first, you don’t succeed

Try, try again. That was the mentality for Herdman in the 58-minute when looking at his bench. The game was slipping from Canadian control thanks to a resurgence by the hosts in the first 15 minutes since the break. When up stepped some of his regular starters. Cyle Larin, Tajon Buchannan, Alistair Johnston. That three-man swap changed Canada’s play, as well as the tides of the match. Forming a striker partnership, ever-reliable Larin’s introduction pulled a plug on the three-man midfield, forming a standard 4-4-2. The aim? Isolate Buchannan and Laryea on the flanks to free up space for them. Between their speed, creativity, and high motor, it was destined to feel more like the team’s usual identity.

Almost immediately the plan paid off, with an El Salvadorian defender getting caught pinching forward. The space behind the defender allowed for a Larin one-on-one match-up with Roberto Dominguez. Larin scampered past and crossed in the ball that lead to the opening goal of the match.

Is this real life?

The 2-0 result secured a perfect window for Canada. Nine points, six goals scored, zero conceded. While there was a shout for a penalty after Buchannan collided with Narciso Orellana in the Canadian box, for seemingly the first time all night, the whistle didn’t blow. With rather little to do in 90 minutes, Borjan faced his first shot on target in stoppage time. In credit to El Salvador, that statistic doesn’t tell the whole story.

Defensively, it was an excellent showing for the Canadians. The defensive line combined for 15 clearances, six interceptions, and an average rating of 7.1 (according to SofaScore). Atiba Hutchinson contributed as well to the defensive and physical play, winning seven out of eight duels and was fouled four times. In Canada’s run of six consecutive victories, the team has scored 13 times, conceding just twice. The squad’s versatility runs deeper than just their attacking play. Consistently switching between three and four at the back based on their opponent, Herdman has only once played the same amount of defenders for more than two games in a row since their last defeat in July in the Gold Cup.

With or without full-backs, different pairings or trios of centre backs, Borjan or Crepeau, you name it. The depth of quality that this team possesses at the back is unlike any that this program has seen before. On any occasion, with or without rest, Herdman is able to field a quality backline best fit for the job. And given three games in seven days with plenty of travel, that depth went a long way in this fixture.

Despite a choppy and rather ugly front, both sides had their moments on Wednesday. For Canada, their defensive effort across the backline and the midfield was second to none. Only allowing 0.37 xG, the team dug deep amid all the travel and headlines surrounding them to shut out a difficult El Salvador side. As for the hosts, a fluke goal against the run of play and a last-second dagger against the best team in the region isn’t the worst result. With hopes of their qualification extinguished, the players played and earned their national pride.

It wasn’t the flashiest of performances for Canada, but the squad’s resilience and expert tactics from Herdman finished off the window right where they started it. On top of CONCACAF, and within touching distance of Qatar.

The post Analysis: Canada hold on for win in El Salvador appeared first on Last Word On Soccer.