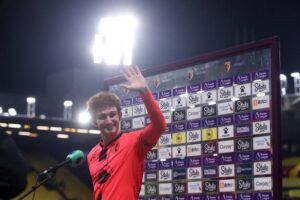 Josh Sargent leads Norwich out of the relegation zone (for now), Musah shines in loss, and another MLS American is on the move to Europe.

Norwich traveled to Watford this weekend for a crucial fixture in the relegation battle. Going into the match, Norwich were in 19th with 13 points, and Watford in 18th with 14. Enter, Josh Sargent. Sargent netted his first two Premier League goals for Norwich, en route to a massive 3-0 win. The first goal was an unreal improvisation, as a cross came in behind him, and he scorpion kicked his leg out to get something on it. A powerful header to the far post earned him the brace, and a serenade of “USA, USA, USA” from the Norwich supporters. On the same day, Sargent was left off Gregg Berhalter’s World Cup Qualifying roster. This will hopefully inject some confidence into the struggling forward.

Musah has just about become a mainstay in Valencia’s first team, and he proved why with another goal and strong performance. Despite Valencia’s heartbreaking 3-2 loss to Atletico Madrid, Musah found the scoresheet. He’s been in good form lately, and is another player that could be crucial for the USMNT WCQ window.

Not much else went down for USMNT stars on the goal scoring front this week, so let’s do some housekeeping.

Daryl Dike earned his first start since the move to West Brom. He went 50 minutes and was subbed off after a hamstring injury concern. Manager Valerian Ismael confirmed he will miss at least their next two matches, and they will know more this coming week. Ricardo Pepi notched his second consecutive start for FC Augsburg. He went 57 minutes before being subbed off.

20 year old Cole Bassett made his USMNT debut in December in a friendly against Bosnia & Herzegovina. He scored the match winner for the U.S. in the 89th minute. Bassett now heads to Dutch club Feyenoord for a loan from the Rapids. The loan is for 18 months.

Bring on the World Cup Qualifiers!