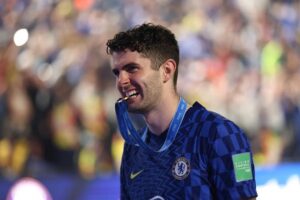 Jordan Pefok can’t stop scoring, Bassett gets on the scoresheet, and Aaronson continues to thrive ahead of massive Champions League ties. As a bonus, Christian Pulisic makes more history for American soccer.

Cole Bassett, who scored a match winner for the USMNT in December, grabbed his first goal for Feyenoord, playing with the U21s. He’s yet to scratch for the senior team but this goal for the U21s should provide some much needed confidence for the 20 year old.

After notching an assist last weekend, Brenden Aaronson notched an equalizing goal for Salzburg against Rapid Wien. Aaronson is in good form heading into their uphill battle in the Champions League. Bayern Munich awaits as Aaronson and Salzburg would love to shock the world

This is almost getting ridiculous. Pefok can’t stop scoring in Switzerland. He nabbed a 71st minute goal and assisted a goal en route to a 3-1 win over FC Basel. Pefok has absolutely played his way into the roster for the final USMNT World Cup qualifying camp.

Another American first for Pulisic

With Chelsea getting ready to defend their Champions League crown, Christian Pulisic became the first American to appear in a Club World Cup final, and win the competition. Pulisic continues to be a trailblazer for this generation, and the next. He subbed in during the first half after an injury. The American continues to struggle to crack the starting lineup in West London. Perhaps this can be the start of him getting back to 90 minutes fit and a starter ahead of the business end of the Premier League season and the final window of Concacaf World Cup Qualification next month.