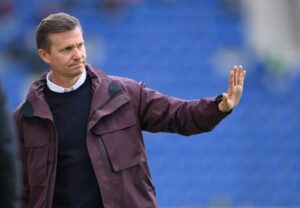 Another week closer to the biggest, and final, World Cup Qualifying camp for the USMNT. Christian Pulisic and Josh Sargent are in form, and favor, at the perfect time. Meanwhile, one of the most important midfield pieces for the USA will be sidelined for multiple months. Elsewhere, potential USMNT manager Jesse Marsch of the future gets a big chance in the Premier League!

Americans Abroad Weekly: Jesse Marsch lands next gig, CP in the UCL, and another injury

This week, we kick off with another injury report. This time around, it’s a much more serious knock than Gio Reyna from last week, who said he’s hopeful to return for the upcoming qualifiers. Weston McKennie however, will be sidelined for at least 8-12 weeks with fractures in his 2nd and 3rd metatarsal bones. He picked up the injury in the 80th minute of Juventus’ champions league tie with Villareal. McKennie has been a massive piece to the midfield for the yanks, and his presence from box to box will be missed in the biggest window yet.

Chelsea welcomed Tim Weah’s Lille to Stamford Bridge on Tuesday for the first leg in the UCL. Christian Pulisic returned to the starting 11, and scored a 63rd minute goal to secure a 2-0 win for the blues. Chelsea take the upper hand back to France for leg two in a couple weeks. Then Sunday, Pulisic started and went 74 minutes in the Carabao Cup final. However Chelsea would go on to lose in a wild penalty shootout. Pulisic has now started three consecutive matches for Chelsea, and played 89 minutes in the Club World Cup final after an injury. It seems like Pulisic is starting to work his way back into Tuchel’s plans.

Despite being locked into a relegation scrap, Josh Sargent has been a bright spot for Norwich City in the recent weeks. Scoring two goals against Watford, and assisting against Liverpool. Josh Sargent has now started 5 matches in a row and 7 of the last 8 for the Canaries. He has absolutely earned his place in the starting 11, and a call up back with the national team.

After burning out as RB Leipzig’s manager this season, Jesse Marsch is set to take over in the Premier League at Leeds United. Marsch, former USMNT player and MLS coach, is widely considered as the best possible American to take over the USMNT once Gregg Berhalter’s tenure comes to pass. Right now though, Marsch will be tasked with keeping Leeds United in the top flight English competition. Marcelo Bielsa was sacked after a 4-0 thrashing by Tottenham, dropping Leeds to 16th place and just 2 points clear of the relegation zone. It would be awesome to see Marsch come in and turn Leeds around, and maybe break the “Ted Lasso” stigma off of American managers.

The post Americans Abroad Weekly: Jesse Marsch lands next gig, CP in the UCL, and another injury appeared first on Last Word On Soccer.