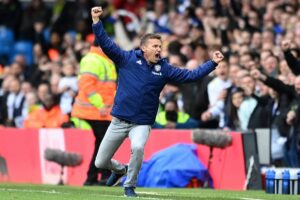 In desperate need of a win, Jesse Marsch and Leeds pulled through. Giovanni Reyna makes another return, and the 17  year keeper for the Chicago Fire is off to a hot start. (Pun 100% intended)

It had been a really rough go to start his time at Leeds, but Jesse Marsch earned his first win at his new club. They suffered a really tough 1-0 loss to Leicester in his first match, and a 3-0 defeat to Aston Villa thereafter. Marsch’s inaugural win came in wild fashion. A 2-1 win over Josh Sargent and Norwich  in a very important bout for the relegation battle. Having led 1-0 since the 14th minute, Norwich equalized in 90+1, in what looked to be a win stolen away. But Joe Gelhardt scored in the 94th minute for Leeds to give Marsch his first of hopefully many more to come.

After suffering another setback, Gio Reyna has returned to Dortmund’s team again. He came off the bench for Dortmund in the 63rd minute, and looked really good. Had a really nice scoring chance and just pulled it wide, but it was a very good sign for USMNT fans to see Reyna back in the fold ahead of the March roster announcement.

Now I know Gabriel Slonina is not an abroad player, but what he’s doing to start this MLS season can’t go unnoticed. Before the season started, Slonina noted that he wanted to set the MLS record for clean sheets, which is currently at 17. Coincidently, that is also Slonina’s age, and he has 3 clean sheets in 3 matches with 8 saves to start the season. He earned a call up to the last USMNT camp to train with Steffen and Turner, and while he’s still very young, we could easily see him work his way into the USMNT fold sooner rather than later.