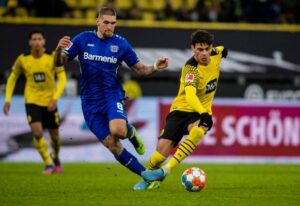 A key player returns for the United States and Gio Reyna has suited up for Borussia Dortmund. Pefok has scored a brace in a wild game in the Swiss Super League, and a quick round up of the last minute deadline day deals. With that, let’s get to this week’s edition of Americans Abroad.

As the U.S. Men’s National team’s January/February World Cup Qualifier camp came to a close, a lot of people were asking themselves, what’s missing from this team? Gio Reyna might be the answer. He returned to action for Borussia Dortmund Sunday, playing the final 30 minutes.

Jordan Siebatchu missed out on another USMNT camp, despite consistent scoring in the Swiss League. Pefok netted a double Sunday for Young Boys in a wild 3-3 draw vs St. Gallen. He sits at second in the Golden Boot race in the Swiss Super League, and should earn a call up in March.

Transfer Window Round Up

The transfer window slammed shut on what was an extremely busy month for Americans. There were a couple more to cover as the window finished off. D.C. United youngest Kevin Paredes teamed up with John Brooks at Wolfsburg in the Bundesliga. He joins Wolfsburg in the middle of the table at 12th.

George Bello, 20-year-old left back from Atlanta United, also made his way to the Bundesliga, joining Arminia Bielefeld. Arminia are fighting to stay up, sitting in 15th with 22 points.

After a busy window for Americans, I can’t think of a time in my life, maybe ever, where there were more American players across Europe. Not just in Europe, but a top 5 league. What a time to be a USMNT fan watching Americans Abroad with a month to go before the final window of Concacaf World Cup Qualification.

The post Americans Abroad Weekly: Gio Reyna is back! appeared first on Last Word On Soccer.