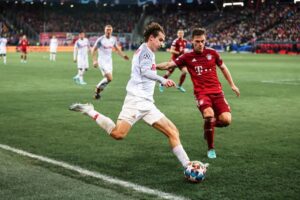 I don’t want to beat around the bush, so we’ll start with the gut wrenching news from Sunday. Giovanni Reyna returned to the starting 11 for Dortmund for the first time since August. He was forced off the field a half an hour in after picking up another injury. He left the field in tears in what was a devastating sight for Dortmund and USMNT fans. Here’s to hoping it’s not too serious. Alright, on to the fun stuff starting with Brenden Aaronson.

As alluded to last week, Brenden Aaronson and RB Salzburg have an uphill battle against Bayern Munich in the Champions League knockout stage. Aaronson and Salzburg had something to say about that. Aaronson assisted the stunning opening goal for Salzburg with a wonderful flick to Chukwubuike Adamu. In the dying moments of the leg, Bayern equalized, but this was a very promising performance from Salzburg. Later this weekend, Brenden Aaronson continued his scintillating form with a stoppage time goal for in Salzburg’s 2-0 win over Wolfsberger AC. I think it’s safe to call him the most inform USMNT player at the moment.

Pefok had something to say about Aaronson being the most inform player. He tried one upping Brenden with a penalty goal and an assist in route to a 2-2 draw. In the current climate, the USMNT do not have a set in stone striker. But every weekend Pefok scores and makes the cut for these pieces. So Gregg, if you’re reading this, call in Pefok!

Josh Sargent burst onto the scene with a brace at Watford just a few weeks ago. Since then, his confidence has clearly shot up and it showed again this weekend. He collected an assist in the opening goal against Liverpool, despite them charging back to beat Norwich 3-1. Sargent is starting to look really solid as a wide player in the Premier League.

This was a very fun weekend filled with lots of appearances and strong performances across Europe. Despite me including just about the same players every week, it’s nice to see consistent contribution in massive matches.