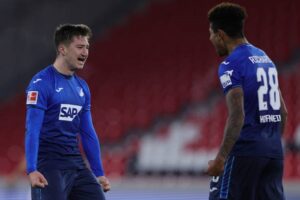 Finally! Another eventful week for Americans abroad! Center Backs scoring goals including Chris Richards, Pulisic making most of his limited minutes, and Aaronson continues to thrive.

There’s a belief amongst a big group of USMNT fans on Twitter that Chris Richards, 21, is already the best and most promising center back in Gregg’s pool. Richard’s 6’2 frame helped him power a header home for a 90+4 minute match winner for Hoffenheim vs Freiburg. The two teams sit in 4th and 5th respectively and are fighting for a Champions League spot in the Bundesliga. Richards, a Bayern Munich loanee, hasn’t seen much time for the US, but with continued consistency for Hoffenheim, his ticket to Qatar should be a lock.

Christian Pulisic continues to fight for playing time at Chelsea, and rumors continue to swirl about potential interest from Barcelona. Pulisic was subbed on in the 65th minute, and 20 minutes later assisted what looked to be a game winning goal from Timo Werner, but Zenit grabbed a last second, 90+4 minute equalizer to force Chelsea into 2nd place in the group behind Juventus.

Brenden Aaronson has burst onto the radar as one of the USMNT’s best prospects, or just players in general for that matter. When RB Salzburg were already up 3-0 to WSG Titrol, Brenden Aaronson assisted Karim Adeyemi’s 3rd goal of the night, and 2nd in 3 minutes. Aaronson is reportedly drawing interest from European clubs such as AC Milan, though now his focus is on Salzburg, who just learned they’ve drawn Bayern Munich at the Champions League Round of 16, after knocking out Sevilla in the group stage.

Christian Pulisic, Weston McKennie, Tim Weah, and Brenden Aaronson all saw their teams advance out of the group stage and into the Round of 16. Here’s who they’ll play:

Christian Pulisic (Chelsea) vs Tim Weah (Lille).  Brenden Aaronson and RB Salzburg will be taking on the toughest matchup for any American in Bayern Munich, lastly, Weston McKennie and Juventus are drawn against La Liga side Villareal. Lots to look forward to.