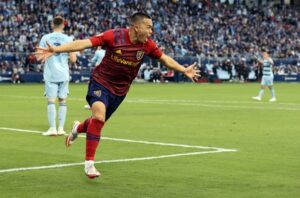 I’m not going to mince words, this was not the best week/weekend for American players abroad, plus some Yanks in the MLS Cup Playoffs. It featured a lot of start’s, and a good amount of minutes played, but not much to show for it. Let’s start with a little bit of a midweek Champions League round-up and finish with Bobby Wood.

Sergiño Dest returned to action in the champions league as an 86th minute substitute after he missed time with USMNT and Barca due to a back injury.

Tim Weah and Brendan Aaronson started in the champions league for Lille and RB Salzburg and went 84 and 85 minutes respectively.

John Brooks started for Wolfsburg in the champions league and went 88 minutes and Jordan “Pefok” Siebatchu started for Young Boys and scored their opening goal in the 39th minute, while playing the full 90 .

It was an incredible sight to see six American internationals starting for their clubs in the biggest club tournament in the world, a mark that had never been reached before.

The MLS Playoffs are up and running, and it’s harder to pinpoint quality performances. But there have been some stand out moments.

Daryl Dike and Walker Zimmerman went head to head in the opening round of the MLS Playoffs, with both starting, and going the full 90. Dike opened the scoring in the 14th minute, and after that it was all Nashville, with the match ending 3-1. Zimmerman was a force in the back line, helping guide Nashville to the second round, where they eventually lost to Philadelphia.

Bobby Wood, yes that Bobby Wood, scored a dramatic 90+1 minute goal to knock out SKC, the heavy favorites in the match. RSL is coming off one of the more undeserving wins you’ll see. They knocked out the Seattle Sounder 6-5 in penalties, after Seattle out shot them by a whopping 21-0, and dominated possession 68-32. This time around RSL were the more spry of the two sides, outshooting SKC 11-5 and out possessed them 56-44.

This past week didn’t see the most impressive performances, despite goals from Dike, Pefok, and Wood. Here’s to hoping this coming week provides more impressive and important performances from our Americans abroad.